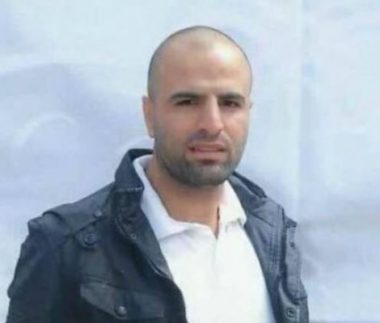 A Palestinian detainee, held by Israel, has suspended the hunger strike he started 67 days ago, after reaching an agreement with the Israeli Supreme Court setting a date for his release.

The detainee, Sultan Ahmad Khallouf, 38, from Burqin town, southwest of the northern West Bank city of Jenin, was taken prisoner on July 7th and has been held under arbitrary Administrative Detention orders without charges or trial.

He went on hunger strike 67 days ago, and only suspended it when the court set December 15th, 2019, as the date for his release, his wife said.

She added that her husband is currently at Kaplan Israeli Medical Center, facing various complications, including blurred vision and oral ulcers.

Since his abduction and imprisonment, the detainee was moved to several Israeli prisons and detention centers.

Prior to his abduction, Khallouf was receiving treatment to various health conditions, including slipped disc, raspatory issues, and hormonal imbalance, and requires constant medical checkups.

It is worth mentioning that the detainee is also a former political prisoner, who spend four years in Israeli prisons.