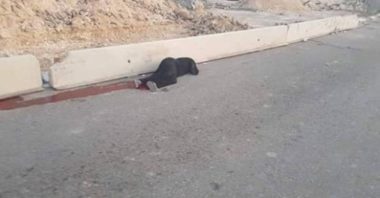 The slain Palestinian woman, who was shot by the soldiers, on Wednesday, September 18th,  after an alleged stabbing attempt at Qalandia Terminal, north of occupied Jerusalem, has been officially identified, Son Sunday evening, as Nayfa Mohammad Ali Ka’abna, 50.

The Palestinian Health Ministry in the West Bank has confirmed the identity of the slain woman and added that Ka’abna was from the Aqbat Jabr refugee camp, south of Jericho in the West Bank.

After she was shot, she was left bleeding for a long time, before an Israeli ambulance moved her to Hadassah Israeli Medical Center in Jerusalem, where she succumbed to her wounds.

Israeli daily Haaretz has reported that the soldiers saw the woman and ordered her to stop, “but she did not heed to their commands, and pulled out a knife before the soldiers shot her.

Following the incident, the soldiers closed the terminal and maced many Palestinians with pepper-spray while trying to remove them from the area.

Israel did not release her name, and her identity was mistaken with another Palestinian woman, however, on Sunday evening, the Israeli “District Coordination Office” officially informed its Palestinian counterpart in the West Bank of her identity.

The woman’s corpse is still with the Israeli side.

After her death, the Electronic Intifada quoted Saleh Hijazi, deputy director of Amnesty International’s Middle East program, stating that the woman  “did not appear to be carrying a firearm and did not pose any immediate threat to the guards or to the lives of people in the vicinity when they opened fire.”

He also said that “this strongly suggests that her killing may have been unlawful,” and added that “the complete lack of accountability for Israeli forces who carry [out] human rights violations” is what allows the pattern of unlawful killings to continue. Israeli soldiers shot, on Wednesday morning, a Palestinian woman near Qalandia Terminal, north of occupied East Jerusalem, reportedly for carrying a knife with the intention of stabbing them.

Israeli media sources claimed the young woman attempted to stab the soldiers before they shot her. So far, the extent of her injuries remains unknown.

A video filmed by a Palestinian bystander shows soldiers several meters away from the woman before one of them shot her, then a soldier approached her and kicked an object away from her.

The soldiers then closed the area and ordered the Palestinian cars away.

Israeli sources have confirmed that nobody else was injured in the incident and added that an army probe is underway.

Following the incident, the soldiers closed the terminal and maced many Palestinians with pepper-spray while trying to remove them from the area.