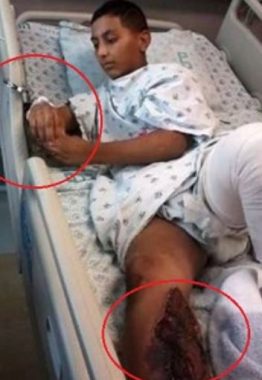 The Palestinian Detainees and Ex-Detainees Committee issued a statement strongly denouncing the Israeli army’s abduction of a wounded Palestinian child, who previously lost one of his legs after the soldiers shot him with an expanding bullet.

The committee stated that the child, Issa Adnan Abdul-Mo’ty, 14, from Bethlehem in the occupied West Bank, was abducted by the soldiers on Wednesday.

On September 19, 2015, the child was shot by the soldiers with an internationally-banned expanding bullet in his leg, prior to his abduction, and his wounded leg was later amputated at an Israeli hospital.

After his leg was amputated following several surgeries that were unable to save it, the child was released, on September 29, 2015, on a 7000 Israeli Shekels bail.

The Committee stated that the re-arrest of the wounded child “is another crime added to the Israeli occupation’s dark history of violence and abuse against the Palestinian children,” and called for an immediate an international intervention to end the escalating violations.

“This detained child is a victim of Israel’s racist policies and decisions to use live fire against Palestinian children,” the Committee added, “Israel is not only using live and sniper fire, including expanding bullets against the children, it also insists on continuing the crime by abducting and imprisoning them.”