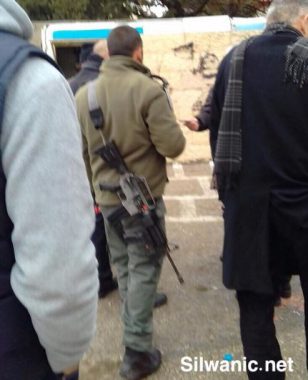 Israeli soldiers abducted, on Thursday at noon, a Palestinian man in Salaheddin Street, close to the Sahera Gate of the Old City of occupied East Jerusalem.

Eyewitnesses said the soldiers stopped the young man, and assaulted him while interrogating him and inspecting his ID card.

The soldiers then abducted the young man, who remained unidentified until the time of this report, and took him to a nearby police center.

The eyewitnesses said the soldiers had no excuse to stop the man, let alone attack and abduct him.

It is worth mentioning that the soldiers abducted, overnight and at dawn Thursday, sixteen Palestinians, including a child, only 12 years of age, during invasions and searches of homes, in different parts of the occupied West Bank, including East Jerusalem.