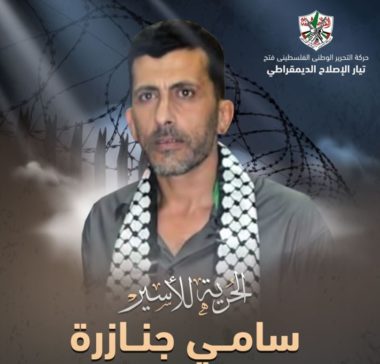 The Palestinian Prisoners’ Society (PPS) has reported, Tuesday, that detainee Sami Janazra, 47, held by Israel under the arbitrary Administrative Detention orders, has suspended his hunger strike after reaching an agreement with the Prison Authorities.

The PPS stated that Janazra started the hunger strike 23 days ago, protesting the ongoing Administrative Detention, without charges or trial.

The agreement states that, after the current detention order ends, Israel will only issue one new order, holding him captive for four additional months, and that the Administrative Detention orders will not be renewed after that.

It is worth mentioning that Janazra, from the al-Fawwar refugee camp, south of the southern West Bank city of Hebron, held three hunger strikes in the last four years, protesting being held under various arbitrary Administrative Detention orders.

His latest abduction was in September in the year 2019, and he has been held under these orders, without charges or trial, since then.

Janazra is a married father of four, including one who was born while he was imprisoned and holding the hunger strike.