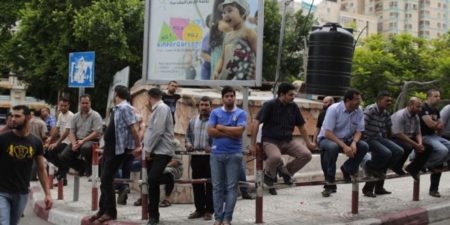 The Palestinian Central Bureau of Statistics ‚ÄúPCBS‚ÄĚ issued its 2019 Labour Force Survey Results, which showed the unemployment rate among labour force participants in Palestine, in 2019, to be 25%; the total labour underutilization was 33%.

Total labour underutilization was 487,400 person including 73,100 discouraged jobseekers and 20,500 in time-related underemployment.

Unemployment rate was the highest among youth graduates

52% is the unemployment rate of youth graduates (19-29) years who hold associate diploma certificate and above, 68% for females compared with 35% for males.

¬†The services sector and other branches (including education and health) was the biggest employer in the local market, where the percentage of employment was more than one third of employed in the West Bank compared with more than half in Gaza Strip.

The average weekly hours worked by wage employees in the West Bank was 44.1 hour compared with 36.6 hour in Gaza Strip. And the average number of days worked per month was 22.8 day in West Bank and 22.7 day in Gaza Strip.

133 thousand employed in Israel and Israeli settlements in 2019

¬†The number of employed in Israel and Israeli settlements was about 133 thousand in 2019, and the largest share of those 71% had a permit, and 20% worked without any permit, while who had an Israeli identity card or foreign passport about 9%.

The average daily wage for the wage employees in Israel and Israeli settlements increased between 2018 and 2019 by 11 NIS, to reached¬† 254 NIS.

¬†7¬†out of 10 of employed are wage employees

¬†71% of employed are wage employees, 25% are self- employed and employers, while 4% are unpaid family members

30%¬†of wage employees in the private sector received less than the minimum wage (1,450 NIS) in Palestine

¬†There had a decreased in the wage employees in the private sector received less than the minimum wage in the West Bank from 12% to 10% between 2018 and 2019, while the percentage in Gaza Strip increased from 72% to 80% during the same period.