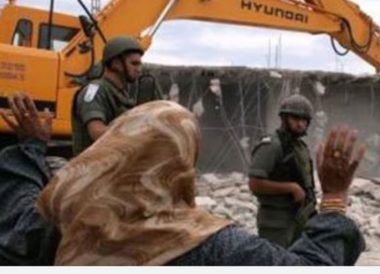 The Israeli occupation demolished a Palestinian housing unit in the southern occupied West Bank city of Hebron, on Thursday, under the pretext that it is allegedly on “state lands,” Quds News Network (QNN) reported.

Fawaz al-Rajbi, brother of Bilal al-Rajbi who owns the caravan, told QNN that Israeli forces accompanied by a bulldozer invaded Jabal Johar neighborhood in Hebron at 9 am and evacuated the 55-square-meter caravan.

Al-Rajbi stated that his brother’s family, consisting of seven members, have lived in the caravan since September 2019, when the army demolished their home the last time.

Home demolition is used by the Israeli occupation state as a means of collective punishment, which Article 33 of the Fourth Geneva convention clearly states is forbidden.