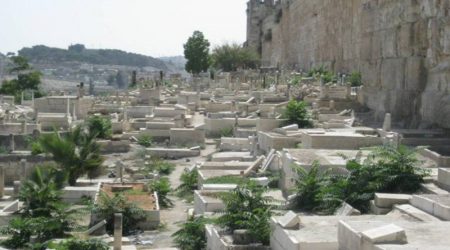 Officers of Israel’s Nature And Parks Authority (INPA) reportedly resumed excavation work on Sunday, at the Palestinian Bab-al-Rahma cemetery, just outside the walls of the Old City in occupied East Jerusalem.

WAFA reported, according to Ma’an, that INPA staff began digging up graves and land in the cemetery around 20 days ago. Officials returned on Sunday, to continue digging, which was noted as being “for the benefit of building a national [Israeli] park on parts of the cemetery’s land.”

In 2015, the Bab al-Rahma cemetery was subject to demolitions after Israeli authorities announced plans to seize parts of the cemetery for a national park trail, in 2015.

While Israel annexed East Jerusalem in 1980, according to Palestinians and the international community, the city has remained an intricate part of the occupied Palestinian territory and would be considered the capital of any future Palestinian state as part of a two-state solution.

The fate of Jerusalem and its holy sites has been a focal point of the Israeli-Palestinian conflict for decades, with numerous tensions arising over Israeli threats regarding the status of non-Jewish religious sites in the city, and the “Judaization” of East Jerusalem.

The resolution referred to Israel as an “occupying power” in East Jerusalem, and stated that UNESCO “regrets the failure of the Israeli occupying authorities to cease the persistent excavations, tunneling, works, projects and other illegal practices in East Jerusalem, particularly in and around the Old City of Jerusalem, which are illegal under international law.”