Don’t Historicize the Balfour Declaration: The Past is Still the Palestinians’ Present 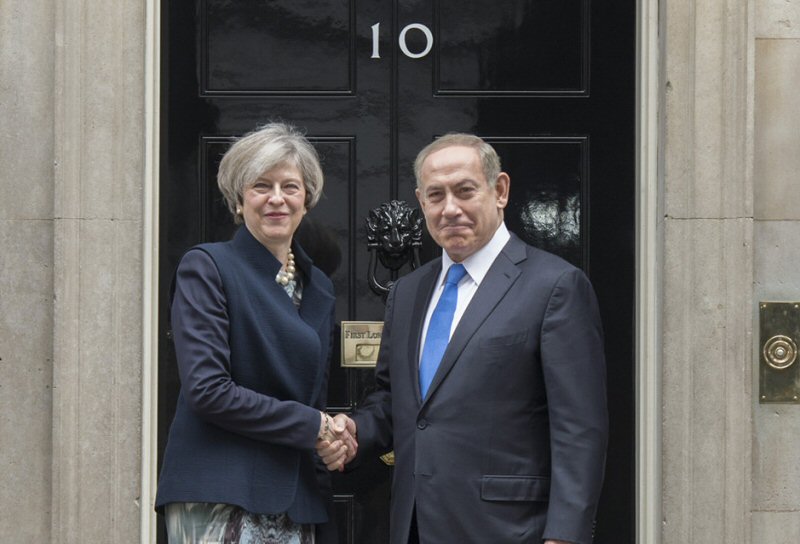 The political turmoil in the United Kingdom following Prime Minister Theresa May’s re-election with a reduced, precarious majority and the implications for the UK’s negotiations to leave the European Union have overshadowed Britain’s other foreign policy concerns. Among other repercussions, it casts doubt on the way in which the UK will mark the centennial of the Balfour Declaration later this year. As is well known, the fateful letter, signed by Foreign Secretary Arthur Balfour on November 2, 1917, promised British support of a Jewish homeland in Palestine, completely disregarding the sovereign rights of the Palestinian people who lived there.

Prior to the elections May had described the declaration as “one of the most important letters in history” during a speech to a Conservative Friends of Israel meeting, and said it was “an anniversary we will be marking with pride.” May’s comments suggested that the British Embassy in Tel Aviv would host a large celebration to honor the occasion. In addition, President Reuven Rivlin invited the royal family for an official state visit to coincide with the anniversary. Though the Queen is unlikely to travel, Prince Charles may attend.

Now it is an open question as to whether May – or indeed the Conservative Party – can stay in power. This provides the Palestinians with an opportune moment to regroup in their efforts, hitherto unsuccessful, to use the Balfour centennial to begin to address Britain’s century of ill-treatment toward the Palestinians. 1

This commentary traces Britain’s treatment of Palestine and the Palestinians since the time of Balfour’s letter, demonstrating a largely consistent pro-Israel stance over the decades. It then considers the consequences that Brexit and the recent elections may have for the Palestinian cause, and concludes with recommendations regarding the kind of apology Palestinians should demand of Britain in light of these past and current events.

One Hundred Years of Bias

Theresa May’s fawning to the Conservative Friends of Israel came as no surprise. Britain’s involvement in Israel and Palestine has consisted of an almost unwavering support for the Zionist project since its colonial inception. Despite claims of a commitment to peace, Britain has shown that it is Israel’s ally first and foremost. This can be seen in its continued arms trade with Israel, despite resultant complicity in Israeli war crimes. Britain has also failed to sanction Israel for its continued settlement building in the West Bank, which has doubled since the Oslo Accords, with over half a million settlers in areas that would constitute a Palestinian state. Moreover, the British government continues to the Boycott, Divestment, and Sanctions movement (BDS), the global nonviolent grassroots campaign for Palestinian rights. 2

A century ago, Christian Zionist ideology, which sought to facilitate the return of Jews to the Holy Land to fulfil a biblical prophesy, guided Britain’s political elite. This cadre included the prime minister, Lloyd George, who led the coalition government. Just over a month after the Balfour Declaration, General Edmund Allenby took Jerusalem from the Ottoman forces, marking the beginning of British colonial rule in Palestine. Though this rule ended at the establishment of the State of Israel in May 1948 and the forcible displacement of and denial of return to the majority of the Palestinian population, British interference in Palestine would continue thanks to Britain’s unwavering commitment to Zionism.

Zionism found support in the British Labour Party, which was sympathetic to a movement it saw as a socialist Jewish liberation project. It is thus unsurprising that the party publicly supported the Balfour Declaration. However, after the 1967 occupation of the West Bank, Gaza Strip, and Golan Heights, more critical voices began to emerge. This coincided with international recognition of the Palestinian Liberation Organization (PLO) and Israel’s shift to the right.

Under Tony Blair’s rebranded “New Labour,” the party renewed its support for Israel. In fact, Israel’s most ardent supporter in recent British politics is Blair, who from the very beginning of his political career in the early 1980s, was a member of the pro-Israel lobby group Labour Friends of Israel (LFI). During his premiership he visited Israel several times, and   among his closest advisors and biggest fundraisers.

Under Blair’s successor, Gordon Brown, human rights activists brought attention to Britain’s relations and particularly its military trade with Israel during Israel’s 2008-2009 Cast Lead offensive in Gaza. A 2014 parliamentary reportconfirmed that the Israeli army used weapons from the UK in its attacks, which killed over 1,400 Palestinians, most of them civilians. Yet calls from activists demanding that the UK cease its arms trade with Israel have come to naught, and relations between Britain and Israel continue unabated.

The current Labour leader, Jeremy Corbyn, has a different stance on Palestine. He has been hounded for his decades of support for the Palestinian cause, particularly for his affiliation with the Palestine Solidarity Campaign. Critics dubbed him a Hamas supporter and an anti-Semite. After his election, the party endured an anti-Semitism scandal that saw the suspension of several party members, including the Jewish activist Jackie Walker, who in a Facebook post referred to the African slave trade as a holocaust. Corbyn subsequently launched an inquiry headed by the barrister and human rights advocate Shami Chakrabarti. The inquiry published its report in June of 2016 and confirmed that despite these claims, Labour is not overrun by anti-Semitism. Many saw the scandal as part of an ongoing attempt by pro-Israel and pro-Blair figures to weaken and undermine Corbyn. Overall, it demonstrates how serious it is for a leading British political figure to take a pro-Palestine stance. The Conservative Party particularly encouraged the attacks on Corbyn.

In the wake of May’s failed attempt to expand her majority, it is now unclear what form Brexit will take. But if Britain leaves the European Union as planned in 2019, some argue that Palestinians may benefit. Ilan Pappe, for example, suggests that Brexit could be an “opportune moment to advance Palestinian freedom” in that Israel would lose its advocate in the EU. As such, EU countries could put forward more initiatives to back Palestinian rights without being blocked by a staunchly pro-Israel Britain. Two months before the Brexit referendum, Prime Minister David Cameron used this argument to support his anti-Brexit stance while addressing a Jewish charity: “When Europe is discussing its attitude toward Israel, do you want Britain – Israel’s greatest friend – in there opposing boycotts, opposing the campaign for divestment and sanctions, or do you want us outside the room, powerless to affect the discussion that takes place?”

By promising to fight against BDS within the EU, Cameron catered to pro-Israel groups whose fears of Palestinian activism increased in 2015 after the European Commission issued its interpretive notice that products made in Israeli settlements bound for the EU be labeled as such. The UK’s stance against BDS stands in contrast to European countriessuch as Sweden, Ireland, and Holland, which have affirmed BDS as a legal example of free political expression.

While an EU without Britain might be able to operate more freely in its support for Palestinians (Israel can still count on strong support from central and Eastern European countries to block initiatives for a just peace), the inverse is also true: Israel’s “greatest friend” would have fewer checks on it from European countries that support Palestinian rights. This could allow Britain to impose draconian restrictions on those in the country who support the Palestinian cause, particularly those affiliated with BDS.

The Kind of Apology Palestinians Need and Deserve

The Balfour Declaration has shaped the Palestinian experience. The signing over of Palestine to a European settler colonial enterprise and the disregard for the rights of the indigenous people is the essence of the Palestinian condition. This disregard continues today, manifested in the charade of the “peace process,” which allows Israel to continue its expropriation of Palestinian land and expansion of a Jewish state while simultaneously professing its pursuit of “peace.”

British officials have a common refrain when they discuss Balfour and the 1948 Nakba: They often state that Palestinians should stop talking about the past and instead focus on the future. This call for the dismissal of past events as bygones is a tactic often invoked by those in positions of power in peace process discourses around the world, particularly in contexts of colonialism and settler colonialism. However, when the past infiltrates the present, as is the case for every Palestinian, whether in Ramallah, Haifa, the Bourj Al Barajneh refugee camp in Lebanon, or the wider diaspora, the demand to forget is impossible.

Palestinians rightly desire a British apology for the letter that helped birth this ongoing oppression. However, initiatives in pursuit of this goal must be wary of several pitfalls. First, using a discourse, as some Palestinians do, that stresses that the Balfour Declaration has not fulfilled its obligations to the Palestinian people is problematic, as it suggests that the document holds legitimacy. The declaration was a colonial document that gave legitimacy to a settler colonial project and as such, Palestinians should not use it to further their struggle or to claim their human rights.

Second, while an apology is important, it must not come as an empty, symbolic gesture, as has happened in many other colonial contexts. Indeed, scholars have written about the limitations of settler state apologies, arguing that in most cases these apologies neutralize the historical narrative while simultaneously ignoring the ongoing oppressive relationship between the state and the indigenous people. 3 An apology must therefore come with the recognition that the past is not in the past, that the settler colonial project is ongoing, and that Britain continues to be complicit in the suffering of the Palestinians through its diplomatic and trade relations with Israel.

As such, any apology campaign must also demand British policy changes that would sanction Israel and hold it to account for its international human rights violations. In this way, the Balfour Declaration would not be historicized as a thing of the past, but would be revealed as a document whose legacy continues to have drastic and devastating consequences for the Palestinian people. Until the British government reconsiders its largely default position and makes a commitment to real policy change, it will continue to propagate the destructive and repressive decision it made a century ago.