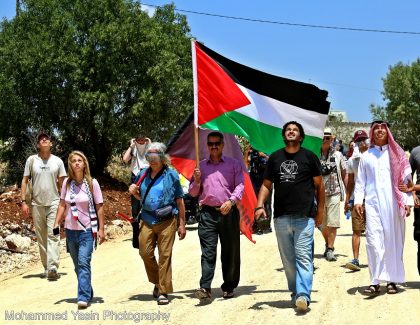 Israeli soldiers attacked, Friday, the weekly nonviolent protest against the Annexation Wall and colonies, in Bil’in village, west of the central West Bank city of Ramallah, causing dozens to suffer the effects of tear gas inhalation.

The Popular Committee against the Wall has reported that the Palestinians, Israeli and international activists, marched from the center of the village towards Palestinian orchards and the Annexation Wall that separates them from their lands, before the soldiers assaulted them. The army fired many rubber-coated steel bullets, gas bombs and concussion grenades as the protesters reached the old site of the wall, causing many to suffer the effects of tear gas inhalation.

The soldiers also used drones to take pictures of the protesters, the Popular Committee added.

The procession started from the center of the village, where the Palestinians, Israeli and international activists gathered, carrying Palestinian flags and chanting for national unity, liberation and the release of all political prisoners. The Popular Committee strongly denounced the ongoing detention and imprisonment of senior nonviolent activist and its spokesperson, Abdullah Abu Rahma, and said that the Israeli decision to keep him held is a racist act that targets the figures of nonviolent resistance, is part of Israel’s efforts to silence those who expose its escalating violations.

It called on European diplomats and ambassadors, in addition to local and international human rights groups, to attend Abu Rahma’s court session this coming Sunday, May 22, at 3 in the afternoon, in the Ofer military court, near Ramallah.

The Committee added that the imprisonment of Abu Rahma, and other nonviolent activists, is a war crime, and a direct violation of International Law. In is worth mentioning that an American delegation visited Bil’in and toured the lands that the Palestinians managed to regain through ongoing struggle, and listened to a detailed presentation about the village and its struggle, presented by the media coordinator of the Committee, Dr. Rateb Abu Rahma.