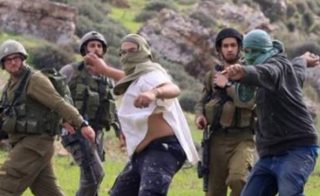 Ghassan Daghlas, a Palestinian official in charge of Israeli settlements file in the northern parts of the West Bank, said that the committee members managed to subdue the armed settlers, and handed them to the Palestinian Authority.

Daghlas added that the Palestinian Security Forces will later hand the infiltrating fanatics to the Israeli army.

He also stated that the two colonists were moved to the Palestinian police station in Qabalan village, and that the police confiscated their guns.

The Israeli army declared a state of high alert, and installed many roadblocks in the area.