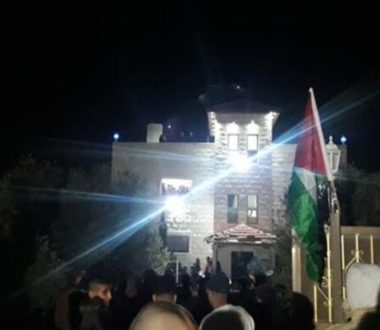 Dozens of Palestinians started gathering, on Sunday evening, in and around the family home of Ashraf Na’alwa, as Israeli soldiers are preparing to demolish it, in Tulkarem, in the northern part of the West Bank.

The Palestinians started flocking to the home, and its surrounding area, in an attempt to prevent the army from demolishing the property as an act of illegal collective punishment against the entire family.

It is worth mentioning that Ashraf Na’alwa, 23, who was killed by the army, on December 13thm 2018, at a Palestinian home in Askar refugee camp, east of the northern West Bank city of Nablus, is accused of carrying out the fatal shooting in Barkan colony, illegally built on Palestinian lands, in northern West Bank, killing two Israeli settlers.

The two Israelis have been identified as Kim Levengrond Yehezkel, 28, from Rosh HaAyin, and Ziv Hagbi, 35, from Rishon LeZion colonies.