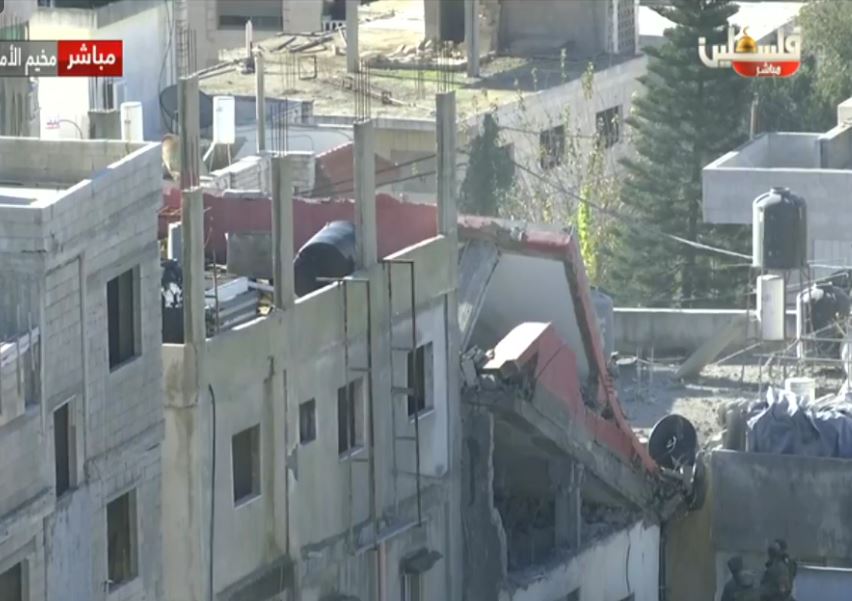 In an all-night massive Israeli military offensive into Ramallah, centered on the al-Am’ari refugee camp, to demolish the family home of Islam Abu Hmeid, Israeli soldiers forcibly removed more than 500 Palestinians from their homes in the dead of night.

The families were forced out of their homes at gunpoint with no food or blankets, and held for hours, as hundreds of Israeli soldiers surrounded their property, and held them at a local school until dawn, when most of the women and children were, hours later, allowed to leave and be sheltered at a Red Crescent facility.

At around 10 am , the military began to withdraw from the area, apparently satisfied that they had sufficiently destabilized the structure of the four-story building to prevent any of the Palestinian families who lived there from being able to continue living there.

The collective punishment of the residents of the building was part of an Israeli policy, which is in direct violation of international law, of punishing the families of prisoners held by Israel by destroying their homes.

In this case, the soldiers wired the family home of Abu Hmeid for demolition, after members of the engineering corps spent hours demolishing interior walls, and planting explosives, which were later detonated, but did not lead to the leveling of the building.

Palestine TV reported that the soldiers then spent several hours to rewire the home, and tried detonating it again, destroying it and causing structural damage to several surrounding homes and buildings.

The invasion which started late at night, was carried out by hundreds of soldiers, in dozens of armored vehicles and bulldozers, in addition to members of the Corps of Engineers. The soldiers surrounded the four-story building belonging to Abu Hmeid family, and all neighboring areas.

The soldiers then invaded dozens of homes and rounded hundreds of Palestinians, including seniors, women and children, and forced them into a local school, which the army illegally occupied and turned into a military base.

Hours later, the soldiers allowed medics of the Palestinian Red Crescent Society (PRCS) to move the women and children to its headquarters to provide them with the needed care, food, and medical checkups.

The Palestinian TV said that about 320 males, from various ages, are still held in the school, and the army is refusing to allow them to leave.

The PRCS said its medics were eventually successful in removing nearly 100 women and children from the school, and took them to its headquarters.

The Red Crescent brought some food and water to the children in the school, and sheets to keep them warm as much as possible.

The WAFA Palestinian News Agency has reported that the soldiers detained the mother of detainee Islam Abu Hmeid, who was taken prisoner on June 6th, 2018, after the army claimed he killed an Israeli soldier, identified as Ronen Lubarsky, on May 24th, during a military invasion into the refugee camp; the soldier was seriously injured, and died from his wounds on May 26th.

The soldiers also attacked the family with clubs and batons, used pepper-spray and tasers to force them out of their home, in addition to abducting and detaining dozens of residents.

In addition, the army fired dozens of gas bombs at Palestinians and their homes throughout the area, causing tens of residents, including children, women and elderly, to suffer the effects of teargas inhalation. At least ten of the wounded Palestinians were moved to hospitals.

Israeli army sharpshooters also invaded homes and occupied their rooftops in the refugee camp, while hundreds of soldiers were deployed in the alleys while firing a barrage of live fire at the Palestinians, homes and property.

Furthermore, the soldiers assaulted and injured many journalists and medics near Abu Hmeid’s home, and opened fire at them, wounding one journalist, while many reporters and medics suffered the effects of teargas inhalation. 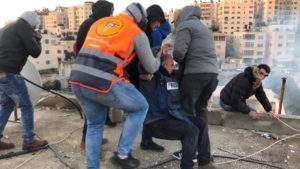 The wounded journalist, is Majdi George Bannoura, a cameraman with al-Jazeera TV, and is in a stable condition.

Bannoura said that he tried to protect head from being hit by a teargas grenade, when it struck his hand, breaking one finger and causing a deep cut.

It is worth mentioning that on December 2nd, the Israeli High Court denied two appeals against the demolition of the four-story home, and gave the family until December 16th to leave the property, but the army decided to demolish it today.

The family of Abu Hmeid was first rendered homeless after the soldiers demolished their home in 1994, then again, demolished the rebuilt property in 2003, especially after the army killed one of its sons, identified as Abdul-Mon’em Abu Hmeid.

Six siblings are held in Israeli prisoners; four of them are serving life-terms, and one, identified as Jihad, is currently held under arbitrary Administrative Detention orders, without charges or trial. The four, who are serving life terms, are Nasser Nasr, Sharif and Mohammad.

Islam Abu Hmeid, who was abducted in June of this year, and accused of killing the soldier, is also a former political prisoner, who previously spent years in Israeli prisons.

The al-Am’ari refugee camp, and all surrounding areas, remain besieged and isolated by the soldiers, who also injured dozens of Palestinians, protesting the invasions and demolition.

Among the wounded are many journalists and medics, who were performing their duties in the areas of protesters, and near the Abu Hmeid home.

At the time of this report, the soldiers were still firing dozens of live rounds, gas bombs, concussion grenades, and rubber-coated steel bullets.

The soldiers caused at least three Palestinian cars to crash, in separate incidents, after firing live rounds towards them, causing the drivers to panic.