Israeli Soldiers Remove Family From Home to Prepare for Demolition 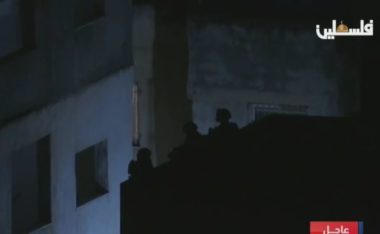 Dozens of Israeli soldiers invaded, on Saturday at dawn, the home of Abu Hmeid family, in the al-Am’ari refugee camp, south of al-Biereh city, in the Ramallah and al-Biereh Governorate, in the central West Bank, in preparation to demolish a four-story building, and engaged in the excessive use of force against the family, and many other Palestinians.

The Israeli military stationed sharpshooters on the tops of all the buildings around the home, and ordered all the families from the neighborhood to evacuate from their homes. An estimated 450 Palestinians were forced out of their homes.

As of the time of this report, camera operators from Palestine TV are streaming live from the site, and the feed shows dozens of soldiers inside the home – they can be seen in the windows of the home using sledge hammers to bash through the walls.

Palestine TV reported that the army is blocking an ambulance from passing, in which a woman is in labor and about to give birth.

The families that were ordered to leave their homes were not allowed to take any blankets or covering with them, or food, they were simply ordered from their homes into the cold winter night. Most of the hundreds of people forced out of their homes went to a nearby outdoor football field  at the al-Bireh School to wait for the army to allow them back to their homes.

The military broke the windows of the al-Bireh School and caused damage to the school building.

Media sources said at least 500 Israeli soldiers surrounded the home, and the area around it, before invading the home. The soldiers used excessive force while removing the family, and hundreds of Palestinian neighbors and supporters who gathered there to protest the demolition.

The army claims that Islam Abu Hmeid, who was taken prisoner on June 6th, 2018, killed an Israeli soldier, identified as Ronen Lubarsky, after dropping a cement slab on his head, on May 24th, during a military invasion into the refugee camp; the soldier was seriously injured, and died from his wounds on May 26th.

Although Islam lives in one of the floors of the four-story building, the Israeli army wants to demolish the entire property to punish his family, in an illegal act of collective punishment.

Palestine TV correspondent Ali Dar Ali said that many army vehicles, including armored bulldozers invaded the refugee camp, and added that the soldiers stormed and searched many homes and buildings, and occupied their rooftops.

He added that the soldiers stormed the home and removed the Palestinians, including the owners.

The soldiers also attacked Palestinian journalists in the refugee camp, and targeted a Palestinian ambulance with teargas, in addition to firing at Palestinians who live in the area, or those who tried to enter the area.

Palestine TV also said that the soldiers detained dozens of nonviolent supporters in the property before forcing everybody out.

The soldiers attacked many journalists, including two who were beaten and struck with batons and rifle-buts, and hurled concussion grenades and gas bombs at medics who tried to provide the needed medical aid to them.

The Palestine Medical Complex in Ramallah said dozens of Palestinians were injured, and are receiving treatment.

The military invaded nearby neighborhoods and villages, where they were met by protesters, some of whom threw stones at the invading soldiers.

Sixty-six Palestinians have been wounded by the Israeli soldiers, who fired tear gas and rubber-coated steel bullets toward the protesters, as well as live ammunition.

The soldiers also fired many gas bombs and concussion grenades, in addition to a few live rounds, at journalists reporting from the rooftops of a nearby building.

In addition, the soldiers are currently detaining more than 300 Palestinians in a nearby area after abducting them in the property and near it.

Israeli soldiers of the Corps of Engineers are currently placing the explosive charges in the build, in order to detonate it, which will also cause damage to several surrounding homes.

The soldiers started removing all families, who live in the area, from their homes after storming and ransacking them, especially since the army is preparation to detonate the Abu Hmeid family home, which will most likely cause damage to surrounding homes and buildings.

On Tuesday August 14 2018, dozens of soldiers invaded the refugee camp and took measurements of the home, in preparation for demolishing the property.

This current demolition of Abu Hmeid family building would be the third times Israeli destroys their home.