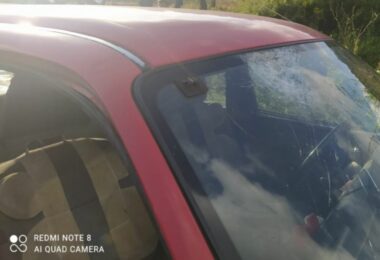 Illegal Israeli colonialist settlers attacked, on Sunday evening, many Palestinian farmers on their lands in Kafr Ed-Deek town, northwest of Salfit, in central West Bank, wounding a young man, in addition to causing damage to a car.

Fares ad-Deek, a Palestinian researcher specialized in Israeli affairs, said many colonists came from the illegal Bruchin outpost, which was installed on stolen Palestinian lands, and started throwing stones at the farmers.

He added that a young man, identified as Salman Shawkat Ahmad, was struck with a rock in the head, suffering moderate wounds.

The colonists also caused serious damage to a car, owned by Rami Tahseen, after he parked it near his land. Ad-Deek also said that the colonists carried out a similar attack on Saturday, causing damage to at least one shed, in addition to assaulting the farmers and trying to force them out of their lands.

It is worth mentioning that Israeli soldiers arrived at the scene and informed the Palestinians that they needed to leave their own lands because the colonists “were picnicking in the area, and “have the right to be there.”

The colonists recently demolished an agricultural shed, in addition to cutting and uprooting dozens of Palestinian olive trees and saplings.

Article 49 of the Fourth Geneva Convention states: “The Occupying Power shall not deport or transfer parts of its own civilian population into the territory it occupies.”