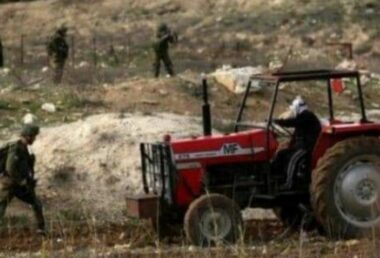 Israeli soldiers confiscated, Sunday, a Palestinian tractor and denied many farmers access to their own lands, west of Salfit, in central West Bank.

Media sources said the soldiers invaded the Khallet Hassan area, west of Bidya village, west of the central West Bank city of Salfit, before confiscating a tractor, owned by a farmer of Masha nearby village.

They added that the soldiers told the Palestinians that they are not allowed to enter and work on their lands in the area.

Besides confiscating the tractor, the soldiers held a bulldozer and agricultural equipment for several hours, before returning them to their owners.

It is worth mentioning that Khallet Hassan, about 4000 Dunams, is subject to frequent Israeli violations, especially since the illegal colonialist settlers are trying to establish a new outpost that would be linked with five colonies and various other outposts between the governorates of Salfit and Qalqilia.

In related news, the soldiers confiscated a bulldozer, owned by a Palestinian from Burin village, south of the northern West Bank city of Nablus.

The soldiers invaded Burin and confiscated the bulldozer while working on building a greenhouse belonging to a local school.