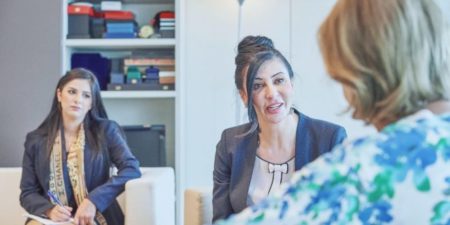 Dr. Jadou started her career with the Palestinian Authority in 2005, after completing her studies in Diplomacy and International Relations at the Fletcher University for Diplomacy and International Relations, as well as becoming a graduate fellow at Harvard University, where she graduated with distinction. In 2009, she took her first diplomatic post as senior advisor to the Palestine Mission in Washington D.C.

She held a number of important political and diplomatic posts during her tenure, as she served in the Presidential Office and in the Palestinian Cabinet. She was later appointed Deputy Ambassador in Washington, and finally became Assistant Foreign Minister for European Affairs.

Dr. Jadou was born in Aida Palestinian refugee camp in Bethlehem. She has a Bachelor in Arts at Bethlehem University, where she studied English language and Literature. During her Bachelors studies, she was an active member of the student Fatah Youth Movement (Shabibeh) at the University.

She volunteered in several local institutions, including Lajee Center, Aida Youth Center and the Popular Comittee of the Aida refugee camp, and the Palestinian Prisoners Club. She continued her Masters studies at Birzeit University, where she traveled to the United States and spent time with the indigenous  Red Indians, where she wrote her thesis comparing the policies of oppression and racism against indigenous peoples of North America with the suffering of the Palestinian people under Israeli occupation.

In recognition of her academic, diplomatic achievements and representation of Palestine, she Jadou received numerous international awards, most notably the Academic Excellence and Young Leadership Award in Japan. She was also recently awarded the order of the Star of Italy with a knighthood from the Italian President, in recognition of her work and successes in promoting Palestinian-Italian relations.

Human Interest 09/10/19 “I Watched My Father And Brother Killed By Israeli Bombs. For Me, The UK Arms Trade Is Deeply Personal”