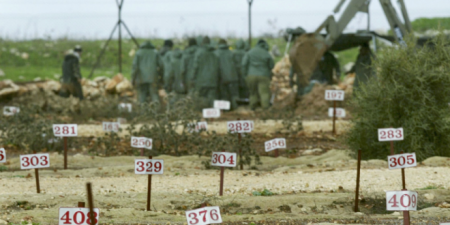 PLO Executive Member Dr. Hanan Ashrawi. in a statement on Thursday, denounced Israel’s decision to bury four of the Palestinians killed by its forces in its so-called “Numbers Cemetery.”

“Such a move constitutes a blatant disregard for life and the sanctity of death, and is yet another violation of international law and international humanitarian law,” Ashrawi said, according to the PNN.

As stipulated in Article 34 of the Additional Protocol to the Fourth Geneva Convention, “The remains of persons who have died for reasons related to occupation or in detention resulting from occupation or hostilities and those of persons not nationals of the country in which they have died as a result of hostilities shall be respected, and the gravesites of all such persons shall be respected, maintained and marked as provided for in Article 130 of the Fourth Convention, where their remains or gravesites would not receive more favourable consideration under the Conventions and this Protocol.”  Furthermore, the Articles affirm that states are “required to facilitate access to the gravesites by relatives of the deceased,” “to protect and maintain such gravesites permanently,” and “to facilitate the return of the remains of the deceased and of personal effects to the home country upon its request or, unless that country objects, upon the request of the next of kin.”

“This is not only inhumane; it is a deplorable form of collective punishment and cruelty for the families who are mourning the loss of their loved ones,” Ashrawi stressed.

“Once again, Israel must be made to comply with the fundamental tenets of decency, civilized behavior and international law,” she concluded.