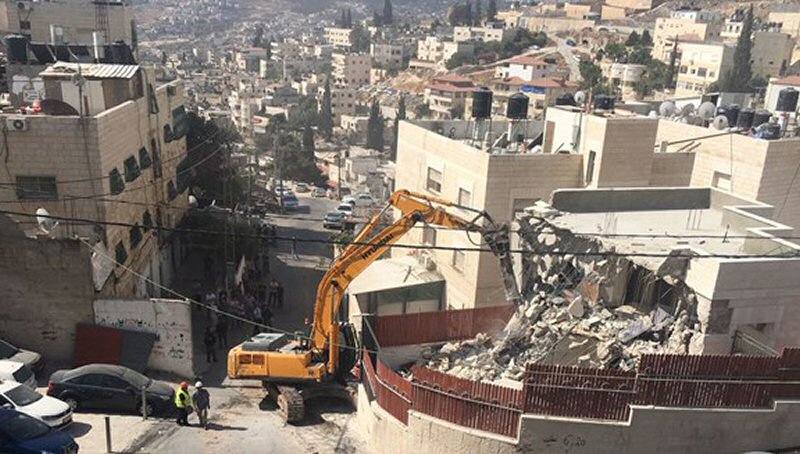 Israeli forces continued with systematic crimes in the occupied Palestinian territory (oPt) for the week of 30 August – 13 September 2017.

In the West Bank, on 03 September 2017, the Israeli authorities declared that Ra’ed al-Salhi (22), from al-Dheishah refugee camp, south of Bethlehem, succumbed to his wounds.  According to PCHR’s investigation, on 09 August 2017, the abovementioned civilian was wounded when the Israeli forces moved into the camp to arrest him.  When they raided the family house, al-Salhi attempted to flee, so the Israeli forces opened fire at him.  As a result, he was hit with 5 bullets to the kidney and 2 others to the thigh.  They then arrested him and left him to bleed on the street for 20 minutes without providing him first aid.  He was then taken to Hadasa-‘Ein Karem” Hospital in West Jerusalem and stayed there until declaring his death.  Moreover, the Israeli authorities refused to let his family visit him during his stay at the abovementioned hospital.

During the reporting period, Israeli forces wounded 7 civilians, including 2 children, in the West Bank.  On 31 August 2017, Israeli soldiers who surprisingly established a checkpoint on the road between Qabatia and Masliyah villages, south of Jenin, opened fire at a Palestinian civilian car.  As a result, the driver was wounded.

On 02 September 2017, Fayez al-Rajabi (60) was hit with a sound bomb to his head when he was near his house in Batn al-Hawa neighbourhood in Silwan village, south of Jerusalem’s Old City.  The Israeli soldiers randomly fired sound bombs in the area in response to child and young men protesting against their incursion into the neighbrhood.

In the Gaza Strip, border areas witnessed protests against the unjust closure imposed on the Gaza population.  During these protests, Israeli forces used force against the protestors, particularly when dispersing them.  As a result, 2 Palestinian civilians, including a child, were wounded after being directly hit with tear gas canisters.

On 05 September 2017, a 21-year-old civilian was hit with a bullet to the right foot when Israeli forces moved into al-Far’ah refugee camp, south of Tubas, to carry out an arrest campaign against the Palestinian civilians.

On 13 September 2017, Laith Daraghmah (18) was hit with a bullet to the left foot when Israeli forces moved into Tubas to carry out an arrest campaign against the Palestinian civilians.

On 13 September 2017, Haitham Jaradat (15) from Sa’ir village, east of Hebron, was hit with several bullets after the Israeli soldiers opened fire at him when he was the eastern entrance to “Karayat Arbaa’” settlement.  The Israeli forces claimed that the above-mentioned child attempted to carry out a stab attack and was then taken to an Israeli hospital.

Two civilians were wounded, including a child, with rubber-coated metal bullets during the Kafr Qaddoum Protest, northeast of Qalqiliya, against the closure of the eastern entrance to the village since the beginning of al-Aqsa Intifada with an iron gate.

In the Gaza Strip, the border areas witnessed protests against the continued and unjust closure imposed on its population.  The Israeli forces used force against the protesters as the shooting occurred to disperse those protests resulted in the injury of 3 civilians.  One of them was hit with a bullet to the hand, the second was hit with 2 rubber-coated metal bullets to the legs and the third was hit with a tear gas canister to the back.

In the context of targeting Palestinian fishermen offshore, on 30 August 2017, Israeli gunboats sporadically opened fire at the Palestinian fishing boats, northwest of Beit Lahia in the northern Gaza Strip, and chased them.  The shooting recurred in the abovementioned area on 10 September 2017.

On 08 September 2017, Israeli gunboats heavily opened fire in the vicinity of the Palestinian fishing boats within the limited fishing area off Khanyounis shore in the southern Gaza Strip.  Neither casualties nor damage was reported.

In the context of targeting the border areas, on 10 September 2017, Israeli forces stationed along the border fence opened fire at the agricultural lands, east of Khaza’ah village, east of Khan Younis.  However, no casualties were reported.

During the reporting period, Israeli forces conducted at least 108 military incursions into Palestinian communities in the West Bank, and 10 ones in Jerusalem. During these incursions, Israeli forces arrested at least 104 Palestinian civilians, including 15 children and 2 women. Thirty five of them, including 12 children and a woman, were arrested in occupied Jerusalem and its suburbs.

In the context of targeting the media institutions, on 31 August 2017, Israeli forces raided al-Hurriyah Radio Station in Hebron.  They damaged the radio station’s contents and furniture and confiscated others.  They fixed to the door a decision to close the radio for 6 months under the pretext of inciting on terrorism and later withdrew.

In the context of creating a Jewish majority in the City, On 05 September 2017, Israeli forces evacuated Shamasnah Family from their house in al-Sheikh Jarrah, north of occupied Jerusalem, to shelter settlers, rendering its eight members, who had lived here for 53 years, homeless.  Shamasnah said that Israeli police expelled the house’s owner, Ayoub Shamasnah (85) on a wheel chair; his wife, Fahmiyah (76), and their son, Mohammed, and his 5-member family.  The Israeli soldiers then vacated the house of its contents.  The family said that they were expelled from their house, which they rented in 1964, and the Israeli forces claimed that the house belongs to a Jewish family before NAKBAH.

As part of house demolitions, on 13 September 2017, Israeli Muncipality demolished a building in Ras al-‘Amoud neighborhood, east of Jerusalem’s Old City.  The building belongs to Montaser and Mo’atasem Abu Farhah , under the preotext of building with a license.  Mo’atasem Abu Farhah, said that the 2-sotrey building sheltered him, his wife and child in addition to his brother Montaser, his wife and 3 children.

As part of settlers’ attacks, on 04 Septemebr 2017, a number of Israeli settlers built a room in front of a house belonging to ‘Ezzat Salah in Wadi Helwah neighborhood in Silwan village, south of the Old City, despite the court’s decision to ban making any change in the house

As part of demolishing houses, on 07 September 2017, Israeli forces handed notices to stop the construction work in 11 houses and a barrack for grazing sheep, northeast of Qalqilya, under the pretext of building without a license.

As part of settlers’ attacks against Palestinian civilians and their property, on 06 September 2017, a group of Israeli settlers, from the evacuated “Homish” settlement, where settlers go there from time to time, attacked Usamah Daghlas (16 and hit him with a stone to the head.  As a result, he was taken to Rafidia Hospital in Nablus for medical treatment.

On 07 Septemebr 2017, agroup of settlers from “Rahlim” settlement established on the lands of Yitma and al-Sawiyah villages, south of Nablus, cut down 43 olive trees with automatic saws.  Those trees belong to Gom’ah ‘Aadi from al-Sawiyah.

On the same day, dozens of settlers from al-Khalil Moutains settlemnts moved into al-Foqar area, east of Halhoul, north of Hebron.  They performed religious rituals near old water wells in the area.  A number of settlers, from “Kermayel” settlement, east of Yata, south of Hebron, threw stones at the residents of Bedouin Kherbet Um al-Kheir and insulted them.

On 08 September 2017, dozens of settlers from Beit ‘Ein settlement established on Palestinian lands, west of Beit Ummer, north of Hebron, and performed religious rituals there in an old Islamic tomb.

On 09 September 2017, dozens of settlers from settlements established in the centre of Hebron’s Old City, threw stones at a house belonging to ‘Ali Abu Rajab after attempting to raid the house following the court’s decision to close the part which the settlers seized on 05 July 2017 and where they stayed for a few days.

Mo’tasem Abu Farhah said to PCHR’s fieldworker that a large force of Israeli police accompanied with the municipality crews and a bulldozer, moved into Ras al-‘Amoud neighborhood. They surrounded the building belonging to him and his brother Mo’tasem, closed all roads leading to it, and then demolished it. It should be noted that the District Court in Jerusalem issued a decision on Thursday, 07 September 2017, to demolish the building under the pretext of building without a license. On Tuesday, 12 September 2017, the lawyer was able to delay the demolition decision for 4 days. However, he informed Mo’tasem and his brother late at night that the delay decision was cancelled and the demolition will be implemented. Mo’tasem added that the 2-storey building shelters him and his 2- member family along with his brother’s family. Mo’tasem also said that the family began to vacate the house contents 2 days ago when the demolition decision was issued.