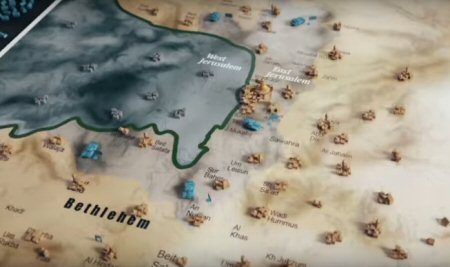 A new video released by the Negotiations Affairs Department, titled “East Jerusalem: Israel’s Colonial Project Unraveled,” declares that Israel’s policy in the city, since the 1967 occupation, is three fold: creating a Jewish majority, reducing Palestinian presence and isolating East Jerusalem and dividing it from its West Bank parts.

According to WAFA, the 2:43-minute documentary describes the policy as one of “special colonial segregation enforced by Israel’s settlement enterprise.”

A total of 3,500 homes were reportedly demolished under the pretext of being built without permit, and around 25,000 more are slated for demolition under the same pretext, leaving 100,000 Palestinians at risk of displacement.

Israel also revoked the residency status of some 14,500 Palestinians in East Jerusalem under all variety of pretexts, while it built thousands of housing units for settlers and opened bypass roads for them through Palestinian land.

This policy created a Jewish settlement population of 100,000 in East Jerusalem, in addition to 200,000 on the western side of the city, in comparison to 300,000 Palestinians holding Jerusalem residency, and including 100,000 who live outside a 240 kilometer-long concrete wall and fence built to separate Israel and occupied East Jerusalem from the West Bank.

“Colonized, impoverished and segregated.” With these words the Negotiations Affairs Department video concludes its narrative of the future facing occupied East Jerusalem and its Palestinian residents.