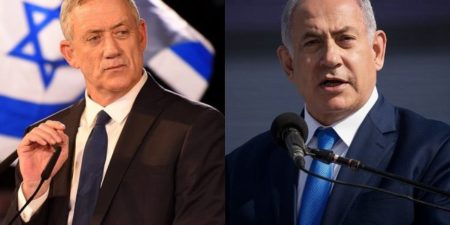 Unofficial results of the 22nd Knesset elections showed that the Likud party of incumbent prime minister Benjamin Netanyahu and the centrist White and Blue party, of opposer Benny Gantz, won 32 seats each, while the joint list received 13. At this time, 92% of the votes have been counted.

Netanyahu, who is Israel’s longest-serving prime minister since July, is seeking a record fifth term in office. However, the first round of exit polls show that Netanyahu’s right-wing coalition bloc could not secure the 61-seat majority they needed.

The results indicate a draw between the right-wing camp with 56 seats and the center-left camp with 55 seats, without the Yisrael Beiteinu party which won 9 seats, PNN reports.

These results make it difficult for Netanyahu and his opponent Gantz to form a government separately. Avigdor Lieberman is calling for a unity government in order to avoid the possibility of a third election.

Gantz said, to his supporters, on Wednesday morning, that “it is necessary to wait for the official results”, according to Al Jazeera. “Netanyahu has not been successful in what he set out to do. We have proved that the idea is Blue and White; that we established a little over a year ago was successful and is here to stay.”

The results came after counting 4055,141 votes, while the Israeli Election Commission postponed the announcement of the official preliminary results, which was scheduled on Wednesday noon, due to the change in the way the data is checked and entered into the website of the Commission.