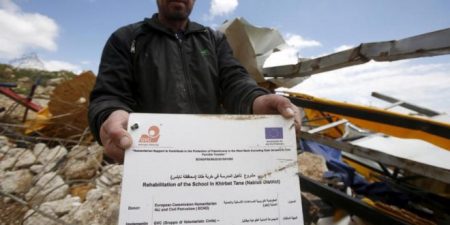 He said that the solar panels were used for a school, kindergarten and a community organisation in Abu Al-Nawar and were confiscated by the Israeli military’s Civil Administration unit.

He explained that the occupation dismantled 10 solar panels and storage batteries worth 50,000 shekels ($12,000).

PNN further reports that the equipment was provided by the European Union to serve institutions in the Palestinian Bedouin community.

Some 105 Palestinian families live in an area of approximately 389 dunams (0.9 square kilometres) and have done so since the 1950s.

They rely on agriculture and herding sheep for their livelihood.

Israeli occupation authorities plan to displace Abu Al-Nawar’s inhabitants for the controversial settlement project E1 which would separate the southern occupied West Bank from the north and tighten Israel’s control of Jerusalem.