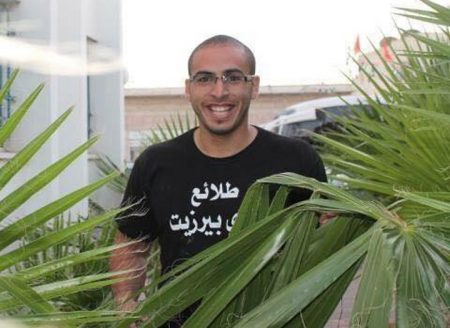 Palestinian youth activist Tareq Mattar was ordered to six months imprisonment without charge or trial under administrative detention on 10 August 2017. The order was issued by the Israeli occupation military commander over the West Bank and a confirmation is expected from an Israeli military court within 72 hours.

Mattar was seized on 3 August after Israeli occupation forces invaded his family home twice in two days, ransacking and destroying his family’s belongings. While in the family home, occupation forces threatened his family members that they will return every day, tear apart the home and harass and even arrest if Tareq did not report for interrogation. When Mattar appeared at the occupation military base with his family, he was seized by occupation forces and his family sent back. Only days later, he has joined 500 other Palestinians in being ordered imprisoned without charge or trial under an indefinitely renewable administrative detention order and 6,200 total Palestinian political prisoners in Israeli jails.