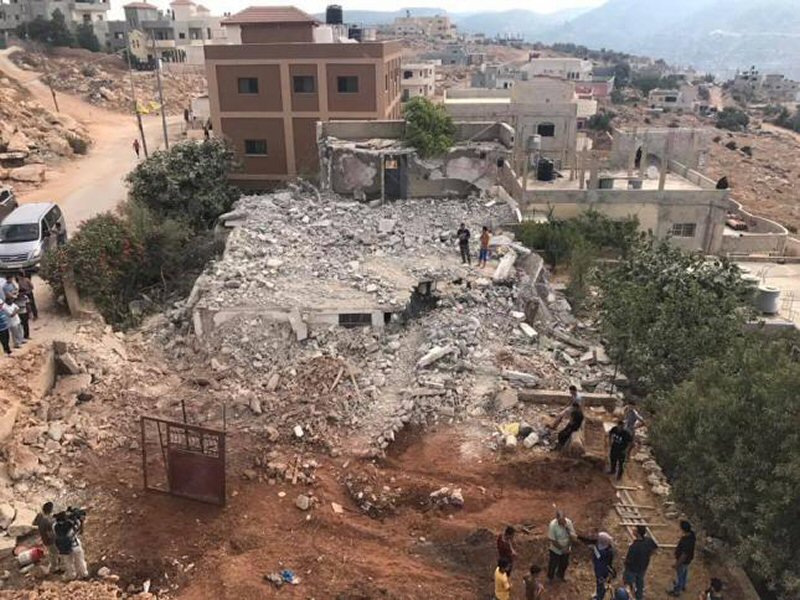 Israeli forces continued with systematic crimes in the occupied Palestinian territory (oPt) for the week of 03 – 09 August 2017.

In the West Bank, on 28 July 2017, Israeli forces wounded 5 Palestinian civilians. Three of them were hit with metal bullets during Kafr Qaddoum weekly demonstration, northeast of Qalqilya, in protest against the closure of the eastern entrance to the village with an iron gate.  The 2 others were hit with bullets when the Israeli forces raided Dheisheh refugee camp, south of Bethlehem, to arrest them.

In the Gaza Strip, border areas witnessed protests against the continued and unjust closures imposed on the Gaza population.  The Israeli forces used force against the participants.  Due to the shooting used to disperse the protestors, 4 Palestinian civilians were wounded; 2 of them with live bullets while the other 2 with tear gas canisters and sound bombs that directly hit them.

In the context of airstrikes, on 09 august 2017, Israeli warplanes targeted in separate air strikes a military training site and checkpoint belonging to Al-Qassam Brigades (the military wing of Hamas Movement) in the northern Gaza Strip.  The first airstrike resulted in the injury of a Member of Palestinian armed groups with shrapnel to the head.  The 2 airstrikes caused damage to the site and checkpoint.

During the reporting period, Israeli forces conducted at least 64 military incursions into Palestinian communities in the West Bank, and 710 ones in Jerusalem. During these incursions, Israeli forces arrested at least 106 Palestinian civilians, including 21 children and 4 women. Thirty-six of them, including 8 children and a woman, were arrested in occupied Jerusalem and its suburbs.

In the Gaza Strip, on 03 August 2017, Israeli forces moved into east of Khuza’ah village, northeast of Khan Younis.  They levelled lands along the border fence between the Gaza Strip and Israel.

In the context of house demolitions, on 08 August 2017, Israeli municipality bulldozers demolished a house belonging to Hamzah al-Shaloudi in al-Rabay’ah neighbourhood in al-Mukaber Mount village, south of occupied Jerusalem, under the pretext of no licensing.  The wife of the house’s owner said that she lived with her husband and 2 children for 3 months in the 65-square-meter house.  She added that the Israeli Municipality demolished the house without any prior warning.  When the Municipality staff arrived to demolish the house, she called the lawyer who headed to the Municipality and managed to get a decision to delay the demolition.  However, the bulldozers had already demolished the house.

On 09 August 2017, Israeli municipality bulldozers demolished an under-construction room belonging to Siyam family in Beit Hanina neighbourhood, north of occupied Jerusalem, under the pretext of no licensing.  The family said that the 45-square-meter room was built of wood as the family started building it 2 months ago.

In the context of demolition notices and house demolitions, the Israeli authorities notified 14 residential, commercial and industrial facilities in Silwad village, east of Ramallah, to be demolished under the pretext of no licensing although the facilities are located within Area B according to Oslo Accords.  The Head of the municipality said that among those notified facilities is a private school located within Silwad Municipality.  This school was built 10 years ago and is the only private school in the eastern Ramallah villages.

Concerning settlers’ attacks against Palestinian civilians and their property, on 04 August 2017, dozens of settlers from “Karayat Arba’” settlement, east of Hebron, attacked Palestinian houses in Jaber neighbourhood to the east of al-Ibrahimi Mosque with stones.  They also attacked Palestinian civilians under the protection of the Israeli police and forces, who did not lift a finger to prevent them.  As a result, Tariq Rebi’ie Tamimi (40) was wounded to the left hand and sustained fracture in the palm of his hand.  Moreover, Menwer Jaber (40) was wounded to the head and transferred to Hebron Governmental Hospital to receive medical treatment.

“While I was near my house, an Israeli patrol stopped me and then detained me. I was then taken to an investigation centre in “Kiryat Arba“ settlement, where they took me to an investigation room. After that, they informed me that there was a video showing I pushed an Israeli soldier in order to seize his firearm. I denied all their claims and asked them to show me the video. At approximately 18:00, I was released on one condition that I should return back for interrogation if they summon me.”

“I live with my family in al-Masharqa al-Fouqa area between “Kiryat Arba’“ settlement and al-Ibrahimi Mosque. At approximately 21:00 when I was home, I heard some shouting in front of the house. I then headed to the window and saw 5 children from our neighborhood walking on the street and around 30 Israeli settlers; most of whom were young, cursing them. One of the children namely Mahmoud Nihad Jaber (7), shouted at the settlers. In the meantime, one of Israeli soldiers came and pushed Mahmoud to the wall and held his hand. I then opened my house door to see what was going on, during which a number of Palestinian young men gathered and attempted to rescue Mahmoud. Meanwhile, the Israeli settlers attacked Ahmed Abed al-Kareem Jaber (15) and hit him with their hands. Ahmed attempted to defend himself, but 3 Israeli soldiers attacked him and pushed him to the wall. Ahmed fell into the ground, during which 2 Israeli soldiers sat over him and started punishing his head and back and then took him away. The Israeli settlers threw stones towards the Palestinian young men and their houses; one of the settlers had an automatic firearm and then pointed it at the Palestinian young men. After that, an Israeli soldier intervened and took the settler away. In the meantime, my neighbor, ‘Aref Jaber (45), arrived at my house filmed what was happening via his phone. Three Israeli settlers then attacked us, so a number of Israeli soldiers approached and took the Israeli settlers away from us, while another Israeli soldier came towards us and sarcastically asked us what is going on? The Israeli settlers continued to throw stones and curse us. The stones heavily fell over my house, so ‘Aref was hit with a stone to his head and started bleeding.  I then took him inside the house.”