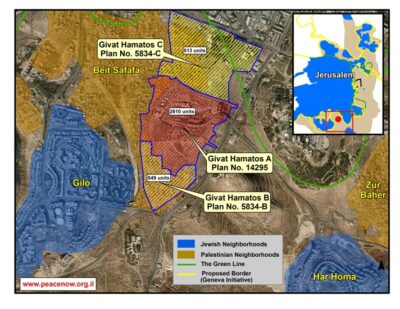 Several representatives of the European Union (EU) in Israel and Palestine visited the site of a proposed Israeli settlement on Monday, issuing a strong condemnation of the Israeli plan to build more than 1200 new units on the site. As they were leaving the site, they were heckled by dozens of right-wing Israelis.

In a statement, Sven Kühn von Burgsdorff, one of the EU representatives, said the proposed Givat Hamatos settlement, “forms part of a worrying trend where Israel continues its policy of advancing settlements in the occupied Palestinian territory”, adding, “If Israel is to go ahead with its plans for a settlement here, it would cause serious damage to the prospects for a viable and contiguous Palestinian State. More broadly, it will threaten the viability of a negotiated two-state solution, in line with the internationally agreed parameters and with Jerusalem as the future capital of two states.”

Burgsdorff reiterated the fact that all Israeli colonial settlements are illegal under international law, and that all settlement activity must stop.

When they were leaving the site, they were confronted by right-wing Israeli settlers. According to the Jerusalem Post, the hecklers shouted, “You are antisemites. You are against Jewish building. Shut up and go home. According to the Bible this is Jewish land. This is the Jewish capital of Israel.”

The construction of Givat Hamatos between Jerusalem and Bethlehem would mean that the Palestinian neighborhood of Beit Safafa would be surrounded on all sides by Jewish-only settlements, with no access to Bethlehem or the rest of the West Bank.

A statement by the Israeli organization Peace Now, which helped facilitate Monday’s EU visit, stated that, “Construction in Givat Hamatos is a serious blow to the two-state solution. This is the last point enabling territorial continuity between Bethlehem and East Jerusalem. A transitional government has no mandate to take such a far reaching policy change. Netanyahu and Trump claim to have advanced a ‘peace plan’, but Netanyahu’s actions, including promoting this expansion, are clear proof that he is doing everything to prevent peace and a resolution to the conflict.”

In addition, the Palestinian Prime Minister, Mohammad Shtayyeh, stated, “The new Israeli colonial-settlement projects in occupied Palestine include plans for units and roads that aim to encircle the Palestinian neighborhoods in Jerusalem further; disconnecting the city from the remaining West Bank towards its complete isolation.”

Israeli Prime Minister Binyamin Netanyahu earlier this year opened bidding for developers to construct 1257 new housing units on the site, which would be constructed on illegally-seized Palestinian-owned land.

Just before the visit to the site, European Union High Representative Josep Borrell stated, “The EU has repeatedly called on Israel to end all settlement activity, and to dismantle outposts erected since March 2001. It remains the EU’s firm position that settlements are illegal under international law. The Government of Israel should instead show vision and responsibility and reverse these negative decisions at this critical and sensitive time.”