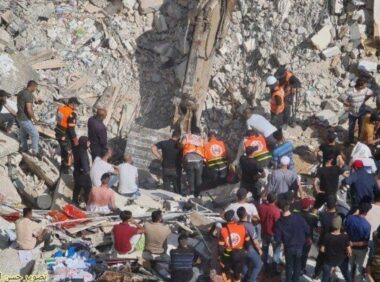 The Israeli army fired at night and during the day Monday, hundreds of missiles, and shells into many parts of the Gaza Strip, hitting many buildings, public facilities, roads, and infrastructure, in addition to many homes, residential and commercial towers, killing dozens of Palestinians and injuring more.

Media sources in Gaza said many of the slain Palestinians are families that were killed by Israeli missiles targeting their homes or apartment buildings. At least twelve additional Palestinians, including children and women, were killed in the latest wave of Israeli aggression. At least one Palestinian from the Abu Jalhoum family was killed and many others were injured by Israeli missiles, west of the al-Amoudi area, in northern Gaza.

In Khan Younis, in the southern part of the Gaza Strip, an Israeli drone fired a missile at Palestinians, east of the city, killing one, identified as Ahmad Arafat, and wounding several others.

The army also fired missiles into the Tal Za’tar neighborhood, in northern Gaza, killing at least one Palestinian and wounding several others.

In Deir al-Balah, in central Gaza, the army fired artillery shells at homes and streets, killing many Palestinians, including children, in addition to killing Aa’ed Masoud, 24, in the al-Qasayeb neighborhood in Jabalia, in northern Gaza. In Beit Lahia, in northern Gaza, the soldiers bombarded a home for the al-Masri family, wounding at least five Palestinians, including four children, in addition to causing a serious injury to one Palestinian in Wadi as-Salqa area, south of Deir al-Balah.

The army targeted infrastructure, residential and commercial towers including those used by Palestinian and international media agencies, medical centers, many schools, and mosques, in addition to various buildings along the Gaza Strip.

On Monday evening, a child was killed, and dozens were injured, after the army fired missiles at a residential tower in the al-Wehda Street, in Gaza city.

The army also fired a missile at a residential tower in the Remal neighborhood in Gaza, killing one child and wounding more than 10 Palestinians. The attack caused serious damage to the building and nearby colic, wounding many patients.

It took place just a few meters away from where the army killing more than 40 Palestinians, and injuring dozens, on Sunday at dawn.

Before the latest Israeli escalation, the Health Ministry in Gaza said Israeli missiles and shells have led to the death of 212 Palestinians, including 61 children, 36 women, and 16 elderly, in addition to wounding more than 1400, including dozens of women and children, many of them in serious conditions.

Many Palestinians remain buried under the rubble of bombarded homes, residential towers, and other facilities, and are presumed dead, amidst constant efforts to locate them in the hope of finding some who are still alive.