Facts On The Ground And Double Standard For Palestine 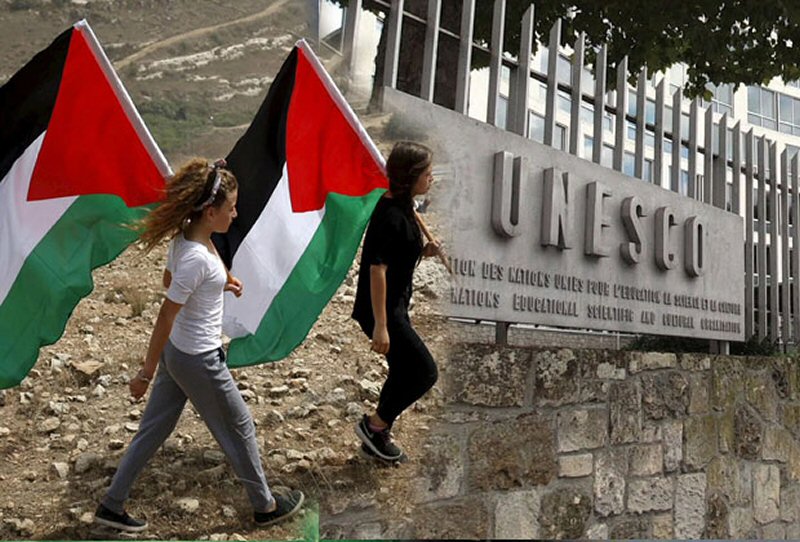 Trump’s decision to withdraw from UNESCO is a flagrant attempt to punish Palestinians for doing what Israel has done all along. Israel has monopolised the “facts on the ground” debate through government-sanctioned settlement expansions into the West Bank, including an announcement this past week about new developments, including in the city of Al-Khalil (Hebron).

Recent estimates of the Jewish settler population living within the internationally-recognised pre-1967 “green line” territory of the West Bank number in the 300,000-400,000 range. Israel does not exactly recognise the green line as the future boundary between the two states, and Israeli Prime Minister Netanyahu has increasingly distanced himself from even discussing a two-state solution in his hard turn toward the right-wing fringes of Israeli politics.

Even prior to Netanyahu’s return to power, Israeli leaders who at least rhetorically favoured a two-state solution consistently discussed the need for “land swaps” to accommodate the growing number of Jewish settlers residing outside of Israel’s officially recognised boundaries.

With the Israeli occupation having marked its 50th year anniversary this past summer, the facts on the ground are, in fact, likely here to stay. At the same time, the peace process has been in utter disarray over the last 25 years or so, with the 1993 Oslo Accords having marked the last real diplomatic breakthrough.

Despite other negotiations having taken place since, there has been little progress in resolving the increasingly convoluted final status issues of borders, Jerusalem, refugees and security, in part because of Israel’s “facts on the ground.” Nonetheless, over 70 per cent of the world’s nations, excluding the United States, Israel, and much of Europe, recognise Palestine as a state.

Widespread bilateral recognition is no consolation for continued occupation and a lack of official international recognition at the United Nations. Without it, the Palestinians have no political or legal recourse.

At the same time, Palestinians are both politically and territorially divided, with the Palestinian Authority maintaining control of the West Bank, and Hamas preserving control over Gaza. Though a unity agreement was just signed between the two sides, previous attempts at presenting a united front have failed because of competing priorities and irreconcilable disagreements. Moreover, Israel, especially under Netanyahu, will not negotiate if Hamas is in the picture.

With a long-stalled peace process, the Palestinian Authority, under the leadership of Mahmoud Abbas began to look for alternatives to the direct negotiation with Israel. In 2011, he mounted a statehood campaign at the United Nations, which was, of course, bound to fail because of the American veto. Nonetheless, he found ways to establish a new set of “facts on the ground,” by gaining Palestinian accession to a number of international organisations, including UNESCO.

If Palestine could gain membership in these organisations, it could accrue tangible benefits while helping to consolidate a norm of recognition by working as a state alongside other nations. The US sought to undermine Palestine’s moves by ending financial support for these institutions, and now, the Trump administration announced its complete withdrawal from UNESCO.

This decision is yet another illustration of the American double standard when it comes to the Arab-Israeli conflict, including on the issue of “facts on the ground.” While the US has long condemned Israel’s expansion of settlements, its criticism has been muted and rhetorical and the special relationship has survived countless announcements of settlement construction.

When the Palestinians lay their “facts on the ground,” which are by most reasonable measures less provocative than the physical movement of Israelis into West Bank territory, the US reacts with punitive economic and diplomatic manoeuvres reserved for only one side of the conflict (and by extension, the international organisations that recognise them).

Considering the organisation’s mission, there is nothing fundamentally threatening about Palestinian participation in UNESCO. The United States and Israel are instead fearful of the possibility that what talks like a state and walks like a state may eventually be universally recognised as a state in more influential venues such as the UN and the International Court of Justice (ICJ). That, of course, is the point of laying facts on the ground. There comes a time when a norm – be it settlers or institutional membership – becomes so entrenched that it is nearly impossible to backtrack.

If any American administration is going to play a relevant role in brokering a solution, it must recognise facts on the ground for what they are… facts on the ground. That the Trump administration withdrew from UNESCO to punish Palestinian membership in the same week that Israel announced new settlements in Al-Khalil is absurd. Either condemn them equally or allow both sides to stake their claims as they see fit.

Dina Badie is an Assistant Professor of Politics and International Studies at Centre College. Her expertise is in American Foreign and Security Policy in the Middle East and Asia.
VIDEO: 10/15/17  US and Israel Show UNESCO their Anti-Palestinian Bias