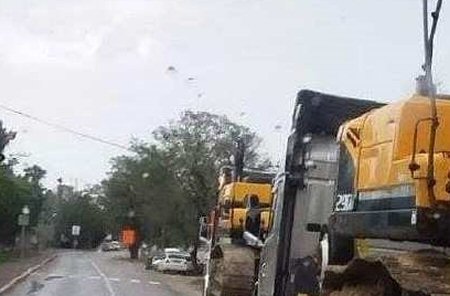 According to local sources, a large number of heavily armed Israeli police forces, along with bulldozers, stormed al-Mahatta neighborhood and demolished a home, under the pretext of being built without the difficult-to-obtain Israeli permit.

Ma’an sources added that the demolished home belonged to Shaher Abu Zayed and that 11 family members were displaced due to the demolition.

In the past few months, dozens of Palestinians have participated in peaceful protests against Israel’s demolition campaign of Palestinian homes in Lod City.

An estimated 700-800 thousand Palestinians were violently expelled from their homes in what became Israel, in 1948.

Today, those who remained on their land in 1948, with their descendants, number over 1.3 million.

While Israeli law guarantees Palestinians the same equality as other citizens, in practice there are claims of discrimination in government funding and a raft of other issues.

Israeli Palestinian rights group Adalah says that only 4.6% of new homes built in Israel are in Palestinian towns and villages, even though Palestinians make up over 20% of the population.

The difficulty for Palestinians in Israel to obtain building permits forces them to expand or build homes and structures without permits, which are liable to later be torn down.

In 2015, the United Nations, as well as other members of the international community, have verbally condemned Israel’s systematic destruction of Palestinian homes and declared the practice as illegal and unfair.