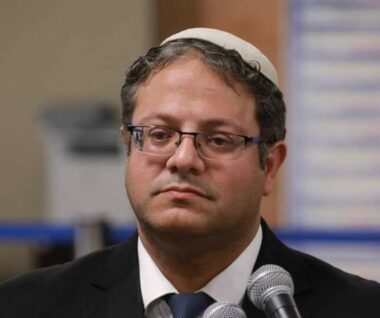 Ben Gvir, far-right Israeli parliament member and follower of Jewish supremacist Meir Kahane was caught on video waving a gun at two Palestinian parking lot attendants and yelling slurs. Both in their early twenties, Mohammed Issa, and Mohammed Shweiki were working in Tel Aviv when they encountered Ben-Gvir and asked him to move his illegally parked car. Tuesday a video was posted to Twitter.

“Shwaiki told WAFA that Itamar Ben Gvir stepped out of a vehicle and began shouting profanities and yelling anti-Arab and Palestinian slurs at them and tried to physically attack them before asking his escort to bring his weapon which he pointed at their faces. He said that Itamar Ben Gvir called the Israeli police, telling them that there are two Palestinian dogs threatening and beating me up.” Shwaiki noted that they videotaped the whole incident, where Mohammed Issa can be heard telling Itamar Ben Gvir “you pulled your weapon on me, everything is videotaped, I didn’t do anything to you.” Reports Wafa news agency.

This is not the first time Ben Gvir has made threats that made the news. In 2007, Ben Gvir was convicted in a Jerusalem court of incitement to racism and for support of a terrorist organization. Gvir, who referred to himself as a Meir Kahane spokesperson was found guilty of carrying signs that read, “Expel the Arab enemy” and “Rabbi Kahane was right: The Arab MKs are a fifth column.” He was acquitted on similar charges for chanting “Death to the Arabs” after a bombing in Jerusalem.

When the video emerged of Ben-Gvir yelling slurs at two Palestinian parking lot attendants, Michel Rozin, also a Knesset member, but a proponent of left-wing ideas said on Twitter-

“When a terrorist supporter is brought into the Knesset, don’t act surprised when he pulls out a gun,” referring to Ben-Givr’s history of support to American Rabbi Meir Kahane’s political party, a far right Israeli group who has been designated as a terrorist organization by Israel and the United States. Reports The Daily Beast.

“The Kahanist Ben-Gvir was convicted of supporting a terrorist organization. Today, under the cover of immunity as an MK, he calls for the murder of Arab citizens and threatens them with firearms…A pistol that is waved in the first act, will be fired in the third. There is no room for this terrorist behavior in the Knesset of Israel,” Meretz Party stated in a report by Jerusalem Post.