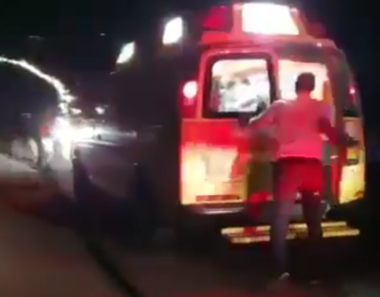 The Israeli army abducted, late on Saturday at night, a young Palestinian man and his father, allegedly for deliberately ramming Israeli soldiers with their car, wounding five.

In a statement, the Israeli army claimed that the incident, which took place late on Saturday evening at Hizma military roadblock, north of occupied East Jerusalem, “was a deliberate ramming attack and not an accident.”

Israeli daily Haaretz said both the father, and his son, were taken for interrogation, and added that the “suspect” who was driving the car is the son, and that he and his father were driving at the roadblock from the direction of Hizma town, and then returned to the West Bank after the incident.

Israeli sources have reported that five soldiers were injured, late on Saturday evening, in what was described as a car ramming attack at Hizma military roadblock, north of occupied East Jerusalem, before the driver fled the scene.

The Israeli Magen David Adom (National emergency medical, disaster, ambulance and blood bank service) said one of the soldiers, in his thirties, suffered moderate wounds after being struck in the head and limbs.

It added that the three other soldiers suffered light injuries, and that all the wounded soldiers were being treated at the scene.

Following the incident, the Israeli army initiated extensive searches in the area, especially in and around Hizma Palestinian town, looking for the car and its driver. The soldiers closed the roadblock and blocked all Palestinian traffic immediately after the incident took place.

Palestinian media outlets said dozens of soldiers surrounded Hizma town, and closed all its entrances, before the army invaded its main streets.

They added that, despite the Israeli allegations, the incident was likely a traffic accident and not an intentional ramming attack, and that the driver apparently fled the scene to avoid being shot and killed by the soldiers, to avoid what happened in previous similar incidents in the West Bank, such as the case of Yousef Raed Anqawi, 20, and Amir Mahmoud Darraj, 20, who were killed by the soldiers, when the army claimed they deliberately rammed soldiers with their cars.