For Organizing Soccer Competition; Army Abducts The Head Of A Social Center, Its Administrator, And Its Coordinator, In Jerusalem 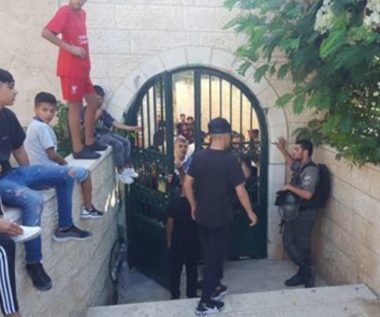 Israeli soldiers invaded, on Saturday evening, Burj Luqluq Social Center Society in the Old City of occupied East Jerusalem, and forced it shut, in addition to abducting its head of its executive administrator, and its coordinator, for organizing a soccer competition for Jerusalemite Palestinian families.

The soldiers and police officers invaded the social center, before abducting its executive administrator Montaser Edkeidik, in addition to handing the society an order barring it from conducting its planned soccer competition, which include ten Palestinian families from occupied Jerusalem.

Earlier Saturday, the soldiers abducted Nasser Gheith, the head of the center, in addition to the coordinator of the Families’ Soccer League, Ala’ Jamjoum, and took them to interrogation facilities in occupied Jerusalem.

The invasion into the center, and the abduction of the three Palestinians, are part of Israel’s escalating violations against the Palestinians, their homes and lands in occupied Jerusalem, and its illegal policies barring the Palestinians from conducting any activities, to assert its control over the occupied city.