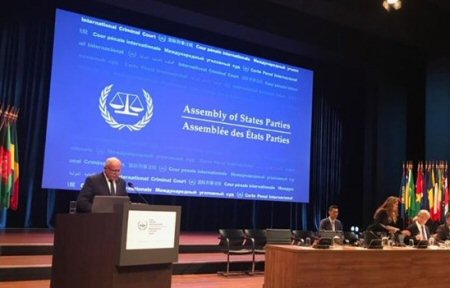 Palestinian Minister of Foreign Affairs, Riyad al-Malki, presented a complaint, on Wednesday, to the prosecutor of the International Criminal Court (ICC), Fatou Bensouda, for procrastination in opening an investigation into Israeli war crimes against the Palestinian people.

The ministry said, in a statement, that al-Malki expressed his disappointment to Bensouda with the initial study carried out by the prosecutor’s office on the situation in Palestine.

Al-Malki’s comments were made during a meeting with Bensouda on the sidelines of the 17th session of the Assembly of States Parties of the ICC; the event opened in The Hague, on Wednesday.

He also called upon Bensouda to speed up opening an investigation into Israeli war crimes against the Palestinian people, to bring justice to the Palestinian victims of the Israeli atrocities.

Al-Malki said that a probe will restrain Israel from continuing to carry out war crimes and will bring justice to the Palestinians.

He told Bensouda that “any delay in the investigation is a delay in bringing justice and gives the occupying power impunity and more time to commit its daily crimes.”

On May 22nd, the Palestinian Authority had submitted a referral to the ICC, for the first time, calling on the prosecutor to open an immediate investigation into Israeli crimes in the occupied Palestinian territories; the referral was presented after Israeli forces had killed 62 Palestinians, mostly in the Gaza Strip, on May 14, who were protesting against the opening of the United States embassy in Jerusalem.