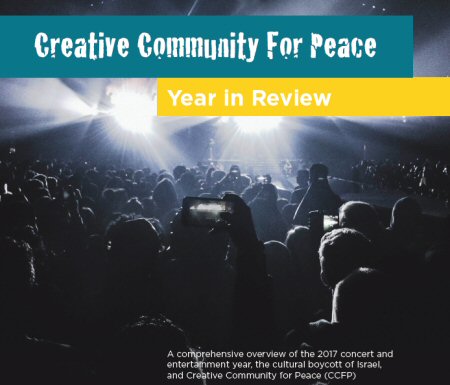 12/06/18 Palestinian Campaign for the Academic and Cultural Boycott of Israel (PACBI) / US, UK

The cultural boycott of Israel is supported by thousands of artists around the world, with pledges to uphold it in the UK, US, Montreal, Ireland, South Africa, Latin America and elsewhere recently bolstered by the artist-led #DJsForPalestine and #ArtistsForPalestine initiatives.

The far-right Israeli government and its lobby organizations have devoted tens of millions of dollars in the attempt to repress the growing Palestinian-led BDS movement.

One such organization is Creative Community for Peace (CCFP), which carefully hides from the artists it approaches that it is simply a front group for StandWithUs, an Israel lobby organization. StandWithUs has close ties to the Israeli government. Tax and registration documents prove that StandWithUs and CCFP are a single non-profit organization.

CCFP claims to advocate for “building bridges”, even as it echoes the Israeli government’s racist, dehumanizing propaganda. As Jewish Voice for Peace recently said:

“Artists who oppose racism and support justice for all people should steer clear of CCFP’s anti-Palestinian lobbying and propaganda efforts.”

In a leaked, confidential report, CCFP made a series of frank admissions about the inspiring growth of the BDS human rights movement, as covered by The Hollywood Reporter.

Parts of the confidential report are now available to see for the first time. Share them to help expose CCFP’s fraudulent attempts to manipulate artists and the public!

If you are an artist, manager, agent or label rep and you would like to discuss Creative Community for Peace, please email pacbi@bdsmovement.net and they’ll get back to you.