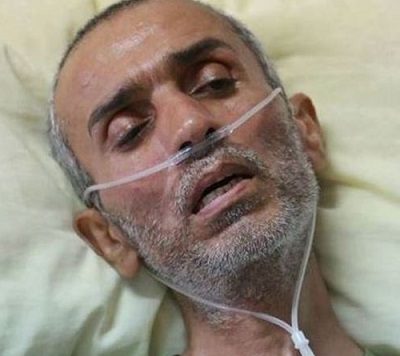 The Palestinian Detainees’ Committee has reported that a former political prisoner died, Tuesday, from serious health complications resulting from years in Israeli prisons without proper and adequate medical treatment.

The former detainee, Naim Younis Shawamra, 46, is from Doura city, in the southern West Bank district of Hebron.

The Committee held Israel fully responsible for his death as he suffered from a number of health issues that went untreated during the years of his imprisonment, an issue that caused various serious complications, including respiratory and muscular dystrophy, eventually leading to his death.

Issa Qaraqe, the head of the Detainees’ Committee, said Shawamra is the latest among hundreds of detainees who died due to Israel’s medical neglect of the Palestinian detainees, and demanded the International Community to intervene and end the Israeli violations.

He added that hundreds of ailing detainees in Israeli prisons and detention centers are facing serious health issues, including cancers, high blood pressure, kidney diseases and many who were shot and injured prior to their abduction.

The official called on the Palestinian leadership to head to the International Criminal Court (ICC), to hold Israel accountable for its crimes against the Palestinians, including the detainees.

The Hurryyat Center for Defending Freedoms and Civil Rights also held Israel responsible for Shawamra’s death, especially since the Prison Authorities did not provide him with the urgently needed specialized medical treatment and, for many years, refused to release him to the Palestinian side to receive treatment there or abroad.

Hurryyat added that many political prisoners, held by Israel, could face the same fate should Israel continue to reject their release, and continue to deny them the needed professional medical treatment.

The Palestinian Center for Detainees’ Studies also held Israel responsible for Shawamra’s death, and called for direct action, locally and internationally, to ensure the release of all ailing detainees, so that they can receive the urgently needed medical treatment before it is too late.

It is worth mentioning that Shawamra was kidnapped by the Israeli army in 1995, and was sentenced to life in prison, but was released 19 years later during a prisoner swap agreement. He was a married father of two.