Army Withdraws From Al-Fawwar, After Killing One Palestinian, Injuring 59, And Searching Dozens Of Homes 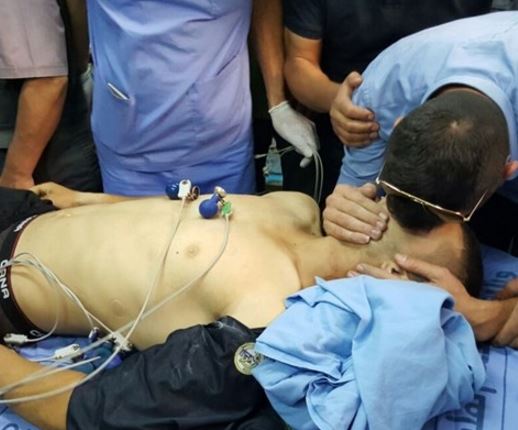 The Israeli army withdrew, late on Tuesday at night, from the al-Fawwar refugee camp, south of Hebron, in the southern part of the occupied West Bank, after concluding a massive military invasion, leading to the death of one Palestinian, while at least 59 others have been injured and dozens of homes invaded and ransacked.

Dr. Waleed Zalloum, the general director of the Hebron Governmental hospital, said 38 Palestinians were moved to the medical center, and that most of them were shot in their legs, thighs and arms.

Zalloum added that one Palestinian, identified as Mohammad Yousef Saber Abu Hashhash, 17, was fatally shot in the chest and died shortly after being moved to a hospital.

Dozens of residents, including many children and elderly, suffered severe effects of tear gas inhalation, and received the needed treatment. Dr. Yousef Takrouri, the general director of the Al-Ahli Hospital in Hebron, said five Palestinians were moved to the medical center; all were shot with live rounds, four in the legs and one in the chest.

Many Palestinian families said the soldiers violently invaded their homes and searched them, and accused the military of stealing gold and cash during the searches. Amjad Najjar, the head of the Hebron office of the Palestinian Prisoners Society (PPS) said the soldiers invaded his home in the al-Fawwar refugee camp, before forcing him and his family in one room, and violently searched the property, causing excessive damage.

Najjar added that the soldiers stole gold and cash from the family home, and that the search of the property lasted for more than four hours.

During the invasion into the refugee camp, the soldiers conducted home-to-home searches, causing excessive property damage, in addition to interrogating dozens of families and photographing them. The Israeli invasion into the camp was initiated at dawn, Tuesday; the army said it was looking for weapons and claimed that the soldiers “located two pistols, one commando knife, sound bombs and dozens of live rounds.