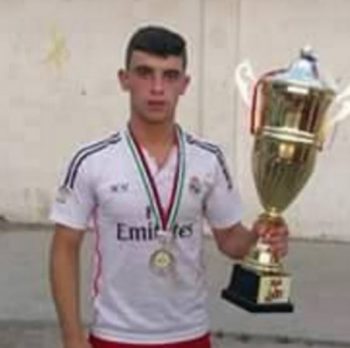 Israeli soldiers shot and killed, on Tuesday evening, a Palestinian teen in the al-Fawwar refugee camp, south of the southern West Bank city of Hebron, and injured at least fifty-nine others, including five who suffered serious wounds.

The Palestinian Red Crescent Society in Hebron said the soldiers shot Mohammad Yousef Saber Abu Hashhash, 17, with a live round in the chest, causing a very serious injury, and that teen died of his wounds shortly after in a local hospital.

The Red Crescent added that the soldiers also shot and injured 45 other Palestinians with live fire and rubber-coated steel bullets, including five persons who suffered serious wounds.

Another resident was shot with a live round in the kidney, before he was moved to a hospital in a moderate condition.

Most of the wounded residents were shot with live fire and rubber-coated steel metal bullets in their lower extremities. Extensive clashes took place in the refugee camp when hundreds of soldiers invaded it, after completely surrounding it, and initiated violent searches of homes leading to property damage.