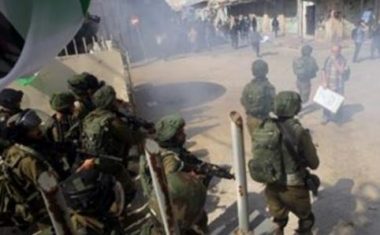 Dozens of Israeli soldiers invaded, on Tuesday morning, the al-Fawwar refugee camp, south of the southern West Bank city of Hebron, broke into and searched several homes, before shooting and injuring seven Palestinians during ensuing clashes, and kidnapped one.

Media sources in Hebron said the soldiers clashed with dozens of local youths, who hurled stones and empty bottles on the military vehicles, while the army fired live rounds and rubber-coated metal bullets, injuring seven Palestinians.

All wounded Palestinians were moved to the Yatta Governmental hospital suffering mild-to-moderate injuries.

In addition, the soldiers invaded a number of homes before violently searching them, and occupied their rooftops to use them as firing posts and military towers.

The Hebron office of the Palestinian Prisoners Society (PPS) said the soldiers also kidnapped one Palestinian from his home. He has been identified as Rajeh Mohammad Ahmad Abu Ajamiyya, 45.

Furthermore, the soldiers launched a surveillance balloon and tightened the siege on the refugee camp.