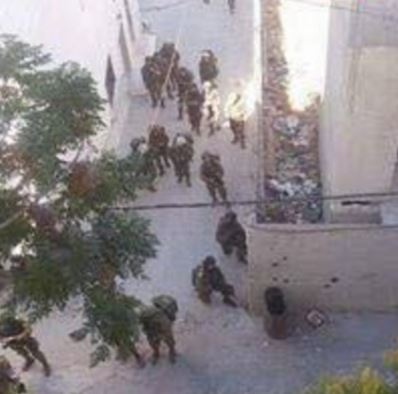 Israeli soldiers kidnapped, overnight and at dawn Wednesday, 24 Palestinians in different parts of the occupied West Bank, during extensive invasions and violent searches of homes. 14 of the kidnapped Palestinians are from Hebron.

The Hebron office of the Palestinian Prisoners Society (PPS) said hundreds of soldiers invaded many communities in the southern West Bank district of Hebron, and conducted violent searches of dozens of homes, before kidnapping fourteen Palestinians.

It is worth mentioning that Ahmad and Amjad Zakariyya are the brothers of Yosri Miswada, 21, who was killed by the soldiers, on December 9, 2015. The Israel army said its soldiers invaded Halhoul city, near Hebron, and located pistols and 40 live rounds in one of the invaded homes, and kidnapped the owner of the building. The kidnappings in Hebron were focused in Hebron city, Deir Samet town, Beit Ummar and Surif.

In Tulkarem, in the northern part of the West Bank, the soldiers stormed and searched homes and kidnapped Mohammad Yousef Mezyid, 20, and Moath Ahmad Abu Al-‘Asal, 21.

In Nablus, also in the northern part of the West Bank, the soldiers invaded homes in Anabta town, west of the city, and kidnapped two Palestinians.

Another Palestinian, identified as Majd Amjad ‘Arqawi, 22, was kidnapped in Jenin, in the northern part of the West Bank.

In addition, the soldiers invaded the central West Bank district of Ramallah, and kidnapped six Palestinians, mainly from the al-Am’ari refugee camp.

On Tuesday evening, Israeli soldiers killed a Palestinian teen in the al-Fawwar refugee camp, south of Hebron, and injured at least fifty-nine others, including five who suffered serious wounds.