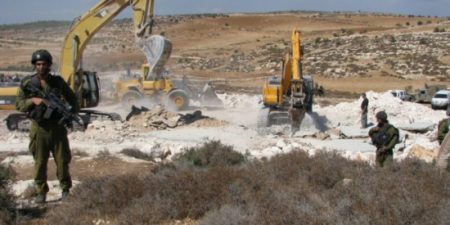 A local  journalist in Hebron said, according to the PNN, that the Israeli army destroyed a water tank and bulldozed Palestinian lands covering an area of 15 dunams  in the western town of Beit Oula, in the southern occupied West Bank.

Over 300 olive trees were planted in the targeted tract. Owned by Palestinian citizen Muhammad al-Amla, the lands, located near the Israeli apartheid wall, were reportedly razed without prior notification.

Army troops went on to chase down Palestinian protesters in the area.