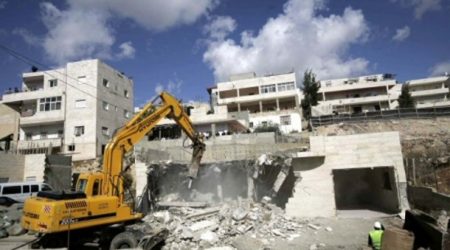 Israeli forces, on Wednesday. demolished two rooms used for agricultural purposes and leveled stone walls in the villages of Khirbet al-Marajim and Qusra, in the southern part of the occupied West Bank district of Nablus.

Daghlas added that soldiers also demolished another room purposed for agriculture, and belonging to Samir Hasan, in the Qusra village.

Israeli forces also leveled stone walls belonging to several farmers in the area, in addition to closing several roads used by farmers to reach their lands in an area near a settlement post around the village of Qusra.

Meanwhile, Israeli forces delivered demolition notices to owners of several houses and properties in the area for being built without Israeli-issued building permits, which are nearly impossible for Palestinians to obtain.

A spokesperson for COGAT, the Israeli agency responsible for implementing Israeli policies in the occupied territory, said that the structures were demolished because the owners did not receive approval from Israeli authorities to build them.

The incidents came just one day after some 70 Palestinians were left homeless by Israeli- enforced demolitions in the occupied West Bank and Jerusalem. Israeli authorities, on Tuesday, also notified a Palestinian farmer near the village of Douma, also in the northern occupied West Bank district of Nablus, that 4 dunams (1 acre) of his land would be seized by Israeli authorities.

Israeli authorities have dramatically escalated their demolition campaigns against Palestinian communities, leaving at least 1,020 Palestinians homeless since the start of 2016.

The majority of the demolitions have been carried out in Area C of the West Bank — under full jurisdiction of the Israeli military — where nearly all Palestinian applications for building permits are denied by the Israeli authorities, forcing communities to build illegally.