What Happened to Ahmed ?! 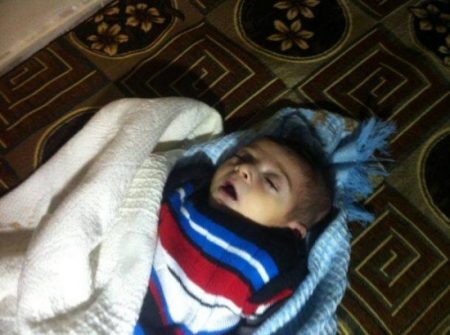 “You would never let my baby die if someone could save him.”

These were the words that the mother of three-month-old Ahmed Abu Nahal used to appeal for the opening of Gaza’s borders, so that her baby could go for treatment.

Days later, the baby passed away as Egypt kept its borders closed, now for more than a month.

Ahmed Abu Nahel, a three-month-old baby, spent more time in bed than at his mother’s breast because he was suffering of enlarged heart and liver, and weakness in heart muscles.

The baby was receiving his treatment at al-Rantisi hospital, in Gaza, but the lack of medicines and medical  equipment made Gaza’s  doctors unable to help him.

The Palestinian doctors in Gaza decided to transfer him, to get treatment in the Israeli hospitals, but the Israelis refused to receive him due to the serious deterioration in his condition.

The Palestinian doctors  contacted Turkish hospitals to receive Ahmed. They accepted to receive him, but the tightened closure of Rafah crossing prevented him from  travelling.

The child’s health couldn’t bear to wait any more. Ahmed was  seriously threatened by death.

The National Committee to Break the Siege sent appeals to the Egyptian authorities to open the border: “Ahmed is dying.” “Save him.” And, his mum was crying, “Please don’t let my baby die in my hands. I can do nothing .” But, no one answered their calls.

Ahmed’s story captured the hearts and thoughts of many people, here, who were all waiting for what the passing time would bring. Would Ahmed wait and be saved or die?

Actually, something happened and I have to tell you. His small heart couldn’t bear any more …Ahmed died.

The illegal and  inhumane blockade is destroying our future, every time  someone dies.

The Rafah and Israeli border crossings are almost always closed. This situation has led to a humanitarian catastrophe .

According to the Palestinian Ministry of Health, more than 145 types of medicine  ran out of stock, and more than one thousand patients were unable to reach to the Egyptian hospitals. This means that death has threatened their lives and they now may join the list of the siege victims.

The story of Ahmed is one of but hundreds. His has story ended, but the pain of thousands of child patients in Gaza still continues.

Ahmed’s soul was a letter to the world  to help in lifting the unjust siege imposed on this narrow coastal enclave. Don’t let us die .Open the door of the biggest  open air prison and let us live.

Edited for American English by chris@imemc.org