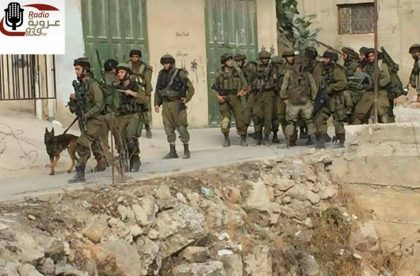 Medical sources in Hebron, in the southern part of the occupied West Bank, has reported that Israeli soldiers shot and injured at least 35 Palestinians, including one who suffered a serious injury, in the al-Fawwar refugee camp, south of Hebron.

The sources said three Palestinians were shot with live fire, including one who is in a serious condition, while around 32 others were shot with rubber-coated steel bullets, during clashes that took place after the military vehicles invaded the refugee camp.

The soldiers stopped a Red Crescent ambulance that was transporting the wounded Palestinian to hospital, and only allowed it to continue driving an hour later.

Media sources in Hebron said dozens of Israeli military vehicles surrounded the refugee camp, before invading it, and initiated extensive and violently searches of homes, in addition to interrogating many Palestinians while inspecting their ID cards. The soldiers also fired many gas bombs and launched a surveillance drone over the camp, after declaring it a “closed military zone,” and occupied the rooftops of several homes to use them as firing posts and military towers.

On Tuesday morning, the soldiers invaded Sa’ir town, northeast of Hebron, and demolished eight Palestinian homes and a well.