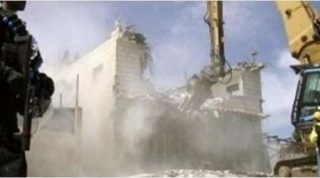 Israeli military jeeps and bulldozers invaded, Tuesday, the city of Beit Jala, west of the West Bank city of Bethlehem, and demolished two Palestinian homes and a room.

The WAFA News Agency said the soldiers demolished two homes belonging to resident Mohammad Zreina, and his family, adding that each of the demolished buildings was 200 square/meters.

WAFA added that the soldiers also demolished a large room, belonging to the same Palestinian, and that the destructions took place in Dir ‘Oweina area, in Beit Jala.

Mohammad said the two homes, and the room provided shelter to twenty persons, and belonged to him and his five brothers; the family constructed the two homes 25 years ago.

Mohammad also stated that the soldiers bulldozed the lands where the homes stood, and uprooted several trees owned by the family.

In related news, the soldiers demolished a stable for horses in Khallet Abed area, in Jabal al-Mokabber neighborhood, southeast of occupied East Jerusalem.

On Tuesday morning, the soldiers invaded the village of Shoufa, south of the northern West Bank city of Tulkarem, and uprooted many olive trees in Khallet Hammoud area, before loading the trees in their trucks and drove to an unknown destination.