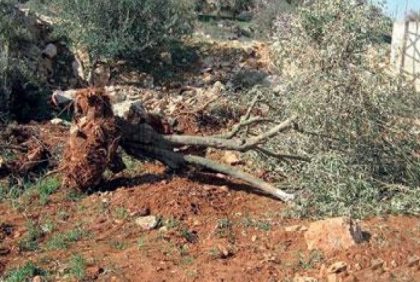 Israeli soldiers invaded, on Tuesday morning, the village of Shoufa, south of the northern West Bank city of Tulkarem, and uprooted many olive trees in Khallet Hammoud area, before loading the trees in their trucks and drove to an unknown destination.

Resident Abdullah Hamed, the owner of the uprooted trees, told the Palestinian News & Info Agency (WAFA) that the soldiers surrounded the entire area, before demolishing stonewalls and uprooted many trees.

Hamed added that the soldiers uprooted the trees from their roots, and loaded them into trucks before taking them to an unknown destination, likely to replant them in illegal Israeli colonies.

The trees were planted 20-30 years ago; the soldiers uprooted around 10 Dunams of the entire orchard of 200.

Hamed said the soldiers prevented him and many activists from entering the orchards, and confiscated the ID cards of many Palestinians.

The Israeli army claims the uprooted orchard, officially and legally owned by Hamed, is in what it called “State Land” in the occupied West Bank.

The Palestinian voiced an appeal to international human rights and legal groups to intervene and stopped the Israeli destruction and theft of Palestinian lands, and property, especially since the area in question is subject to frequent Israeli attacks in an attempt to expand the illegal colony of Avnei Hefetz, built in privately-owned Palestinian lands.