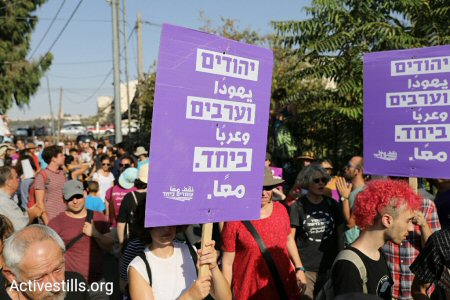 According to Israeli media, over 200 Israelis marched from central Jerusalem to the neighborhood of Sheikh Jarrah, Friday, to protest the eviction of a Palestinian family from their homes. The demonstrators marched on West Jerusalem’s thoroughfare until they crossed over into the Palestinian neighborhood, where they were met by dozens of local Palestinian protesters.

On Friday, police took two residents of Sheikh Jarrah, who marched in the direction of the Israelis, into custody — one for waving a Palestinian flag, and the other — a minor — following settler complaints to the police. The minor was only detained for a short period of time, although his mother collapsed and had to be taken to the hospital upon his detention. Meanwhile, during the Israeli march toward Sheikh Jarrah, a passerby threw eggs at the demonstrators. Among the marchers were Joint List head Ayman Odeh and Yousef Jabareen, also of the Joint List, 972mag reported.

After the marchers arrived in the neighborhood, one of the Israeli protesters climbed the Shamasna family home and removed the Israeli flag hung by settlers who had commandeered the house. In response, the settlers attacked some of the protesters, throwing stones and pepper spraying them. Two Israeli marchers were arrested.

Palestinians in occupied East Jerusalem performed Friday prayers in front of the Shamasna family home, in an act of protest against the family’s forced eviction.

Members of the Shamasna family participated in the prayers held outside their home, along with Palestinian Mayor of Jerusalem Adnan al-Husayni, Fatah’s Jerusalem Secretary Shadi Mtour, Fateh official Hattem Abd al-Qader, and other religious and national figures.

Sheikh Abdullah Alqam, who gave Friday’s Khutbah — Islamic sermon — condemned the expulsion of the Shamasna family from their home and said that the Israeli legal system was “biased” towards Israeli settlers.

Alqam said that, despite Israel’s relentless attempts to displace Palestinians from Jerusalem, Jerusalemites were determined to defend their rights and existence in the city.

Mohammed Shamasna, 45, and his son Dirar, 23, were released from Israeli jail on Thursday after being detained during the settler-driven eviction on Tuesday. While earlier reports noted that no release conditions were placed on the two, locals said on Friday that Mohammed was banned from entering Sheikh Jarrah for two weeks. It was unclear if this also applied to Dirar.

The Shamasna family was the latest Palestinian family to be evicted from the neighborhood since 2009 under an Israeli law that allows Jewish Israelis to claim ownership over properties that had once been owned by Jews before 1948, when thousands fled East Jerusalem during the Arab-Israeli war.

However, this law does not extend to Palestinians, hundreds of thousands of whom were displaced from their lands and homes in present-day Israel in 1948.

Sheikh Jarrah has become a central target for Jewish ownership claims, as the neighborhood was allegedly once the site of a 19th century Jewish community.

In 2009, the Um Kamel al-Kurd, Ghawi, and Hanoun families were completely evicted from their homes, while Israeli settlers partially took over the al-Kurd family home, who still live side-by-side years later. More than 60 Palestinians were displaced during the wave of evictions in 2009.

On Sunday, six more Palestinian families were handed eviction notices, ordering them to leave their homes within 30 days owing to Israeli settler claims on their properties.

The European Union Representative and the EU Heads of Mission in Jerusalem and Ramallah released a joint statement on Friday condemning the eviction in Sheikh Jarrah.

“Further settlement plans foreseeing large scale construction and evictions in Sheikh Jarrah are being moved forward by the planning authorities. The EU has repeatedly called on the Israeli authorities to reconsider these decisions,” the statement read.

The statement reiterated the EU’s stance on the illegality of Israeli settlements in the occupied Palestinian territory and “its strong opposition to Israel’s settlement policy and actions taken in this context, including evictions and demolitions.”

“Settlement activity in East Jerusalem seriously jeopardizes the possibility of Jerusalem serving as the future capital of both States,” the statement added.

Director of the United Nations Relief and Works Agency for Palestine Refugees (UNRWA) Scott Anderson said in the statement on Wednesday that he was “appalled at the resumption of forced evictions in Sheikh Jarrah and particularly worried about the humanitarian impact on this refugee family (Shamasna).”

“Palestine refugees, who have already endured multiple episodes of displacement, should not be subjected to forced evictions,” Anderson said.

According to UN documentation, 180 Palestinian families — comprising of 818 individuals, 372 of whom are children — are at risk of forcible displacement in East Jerusalem owing to settler-driven evictions. UNRWA noted that in Sheikh Jarrah, 60 percent of those at risk of displacement are Palestinian refugees.

Israeli rights group Ir Amim has noted that Israeli settler plans have focused on taking control of the entire neighborhood and then demolishing it to establish a massive Jewish settlement there.

The settlement would be called Shimon HaTzadik, named after the tomb of the biblical figure Simeon the Just, which is believed by Jews to be located in the neighborhood, and which the 19th century Jewish community had also allegedly once been called.

Photo: Hundreds of Israelis march from West Jerusalem to Sheikh Jarrah to protest the eviction of the Shamansa family from their home, September 8, 2017. (Oren Ziv/Activestills.org)