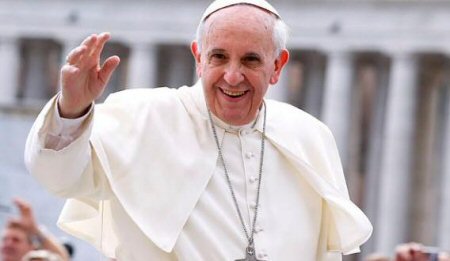 Pope Francis reiterated, on Monday, his call to respect the status quo of Jerusalem following US President Donald Trump’s recognition of the city as Israel’s capital.
Addressing ambassadors from more than 180 countries Francis said, according to the PNN, “We reiterate our call to abide by UN resolutions and to respect the joint commitments over the status of Jerusalem, which is sacred to Christians, Jews, and Muslims.”

On 21 December, the UN General Assembly overwhelming adopted a Turkish-sponsored resolution rejecting Trump’s move by a vote of 128-9, with 35 abstentions.

Pope Francis also urged a two-state solution between Palestinians and Israelis, saying “Establishing a dialogue and maintaining the negotiations, despite all the difficulties, are the best way in order to make two nations live in peace.”

“It is very important that refugees — who took shelter in neighboring countries; particularly Jordan, Lebanon, and Turkey – return their home,” the Catholic pontiff said of the Syrian refugees who have fled the civil war in their country.

Turkey hosts more Syrian refugees than any other country in the world. The country has spent more than €20 billion from its own national resources for helping and sheltering refugees since the beginning of the Syrian civil war.

Praising efforts by countries across the world that host refugees, he called on international community to facilitate the return of all who have been displaced from their homes.

The Pope also thanked Bangladesh for hosting Rohingya Muslims who fled violence in Myanmar. Since 25 August 2017, over 656,000 Rohingya have crossed from Myanmar’s western state of Rakhine into Bangladesh, according to the UN.