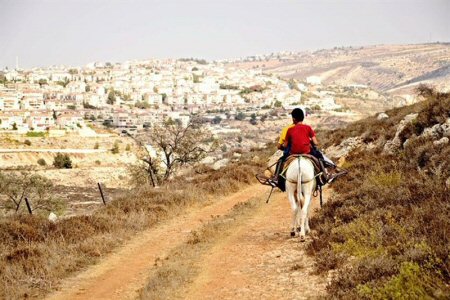 A Palestinian rides on a donkey with a settlement in the background (Photo: Christian Peacemaker Team)

Palestinian Foreign Minister Riyad Maliki criticized the US government on Wednesday for “giving the greenlight” to Israel, to do “whatever it wants with Palestinian land,” with regard to Israeli announcements of plans to build over 1,000 new illegal settlement units in the occupied West Bank.

WAFA reported, according to Ma’an, that while speaking to the Voice of Palestine Radio, Maliki said that Israel’s announcement of its plans to build 1285 new settlement units in the West Bank was “one outcome of US President Donald Trump’s recognition of Jerusalem as Israel’s capital.”

Malki told the radio station that the Israeli decision was “also a result of the international community’s failure to hold Israel accountable for its acts, particularly with regard to settlement construction.”

He expressed concern that the international community was afraid to take a stand on settlements, which are illegal under international law, because of recent US threats to cut aid to states and organizations who defy American pro-Israel policies.

Maliki said, “Palestinian leadership cannot rely on anyone anymore,” though it will “continue to struggle against Israel’s ongoing violations on the political, diplomatic and legal fronts.”

01/09/18 Erekat: No Negotiations with Jerusalem Decision in Place