Freedom March “Stop drying out Palestine, Water is a Right for All” 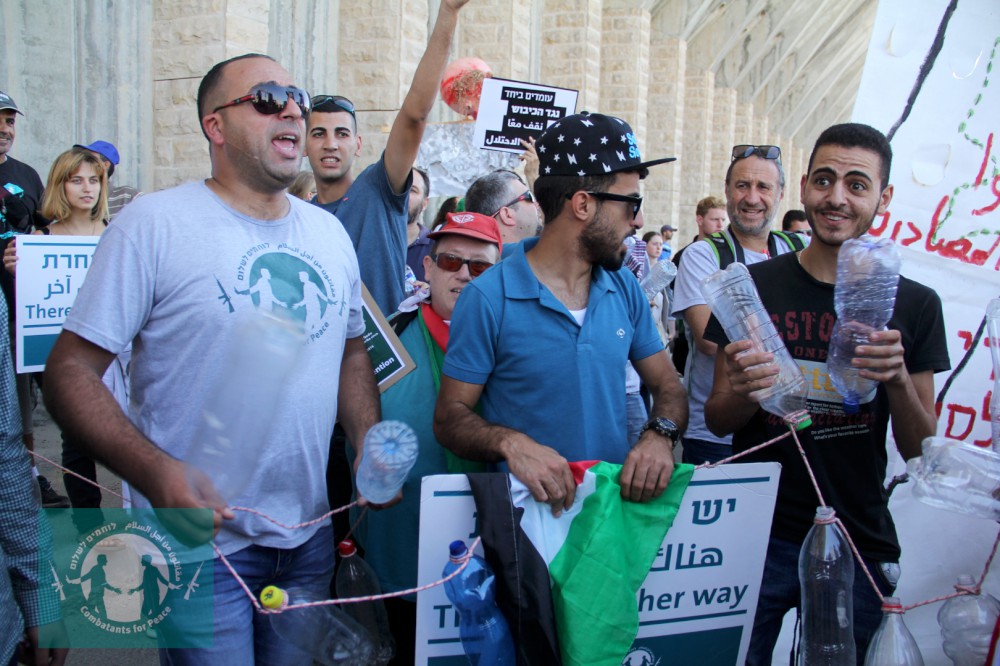 At least 200 people joined on Friday the monthly freedom March demanding the Israeli occupation to “   Stop drying out Palestine, Water is a Right for All”. The protest was organized by Combatants for Peace movement in association with a number of Palestinian and Israeli NGO’s.

The protest started at midday from Huassan village round about, south of Bethlehem city, and marched via road 60 all the way to the tunnel checkpoint separating Bethlehem area from Jerusalem. During the march protesters carried a water tank made out of cartons, empty bottles of water and signs demanding the occupation to stop taking Palestinian water and fair distribution to all residents in the West Bank.

When arriving at the checkpoint the Theater group of CFP preformed a small play about the life of Palestinians under occupation and the difficulties they face. At the end of the protest, Yessri Salameen, from CFP, delivered a speech saying “what the occupation is doing is a clear violation on Palestinian water” he added “From here we demand that there be justice and fairness and application of international laws and norms in the distribution of water fairly to all citizens in the occupied territories.” From her part, Dr. Yeela Ra’anan, from Standing Together coalition, a partner group in the freedom march, she said “   As long as there is occupation there will not be peace, the inequality in the distribution of water between the two parties by the occupation has no justification because Israel has advanced water technologies that allow it to overcome the drought and better distributes water.

Combatants for Peace movement calls for the establishment of an independent Palestinian state with its capital in East Jerusalem, based on the border of June 4, 1967, alongside Israel. CFP uses nonviolent means and call on both nations to join us to achieve peace and reconciliation between Palestinians and Israelis.