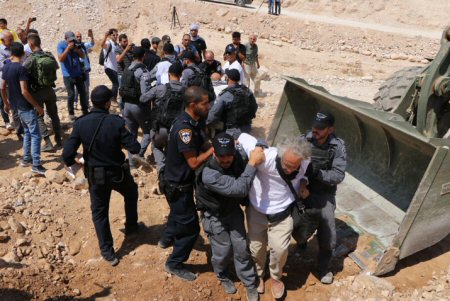 A French-American activist started a hunger strike on Friday, after he was detained by Israeli police, when activists in Khan al-Ahmar village, east of Jerusalem, blocked Israeli bulldozers trying to close roads to the village, according to Abdullah Abu Rahmeh, from the Save Khan al-Ahmar campaign.

He told WAFA that Frank Romano, professor of law at University of Paris and author of “Love and Terror in the Middle East”, was detained along with four other Palestinians when they confronted Israeli police and bulldozers attempting to block roads to the village, slated for demolition by Israel in order to replace it with a settlement.

Romano, who lives in France but is also an American citizen, was first taken to a police station in the nearby illegal settlement of Ma’ale Adumim before he was transferred to the Russian Compound police station in West Jerusalem, where his detention was extended for four days.

Abu Rahmeh said Romano will be on hunger strike until Israel annuls the demolition decision against Khan al Ahmar.

Romano has been active in the around-the-clock vigil, at Khan al-Ahmar, that Palestinians and international solidarity activists have been observing since the Israeli High Court gave the green light to the Israeli army, on September 5, to demolish the Palestinian Bedouin village and displace its residents.

The decision to demolish Khan al-Ahmar has generated widespread international reaction, all warning Israel against proceeding with the demolition and the construction of a settlement on its location, due to its catastrophic impact on the future of peace in the region.

US Senator Dianne Feinstein tweeted on Thursday, saying, “Israel must not demolish the Palestinian community of Khan al Ahmar. The only reason to destroy this community is to expand nearby Israeli settlements and split the West Bank in half. The potential for peace depends on what happens to Khan al Ahmar.”