At around 11.30 am, a bulldozer escorted by a police and military vehicles approached the Bedouin village of Khan al-Ahmar and began to move rocks and earth, in order to block access to the village via dirt roads on the outskirts, to prevent resident and activists from reaching the area. 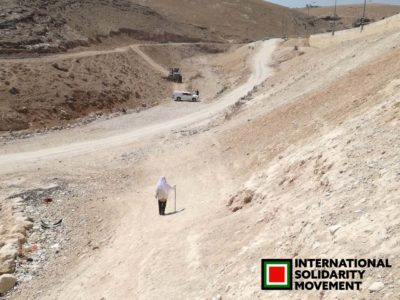 Soon after, locals and activists approached the bulldozer and started a passive, peaceful resistance by sitting in front of the machine, in order to prevent the aggressors from completing their “mission”. 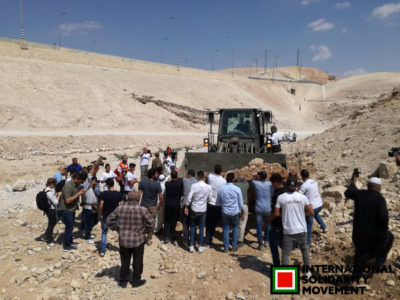 After a few minutes, a large number of Border Police and regular Police officers reached the area and began to force people away from the machine; the police gave the activists 5 minutes to leave the area.

A short time after they issued the warning to leave the area, the military and police began to use forceful violence. The Israelis aggressor began pushing and dragging the peaceful demonstrators blocking their illegal operation away from the area. During this use of force, the police also used violence towards the medical teams and press who were present at the site. 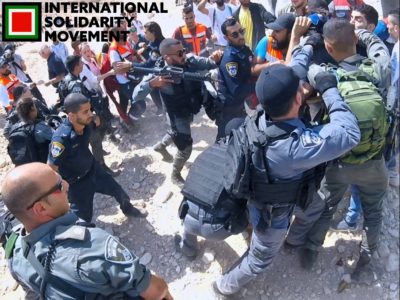 An elderly man, very well known in the community as Abu Tiger, was violently attacked during his peaceful demonstration against the actions being carried out by the Israeli forces. After being pushed to the ground he was dragged by multiple policemen, arrested and detained in a police vehicle, during this attack he was bleeding from the head and knocked unconscious.

Multiple other people were arrested during this assault: including Palestinian activist and a French-American professor and activist (Frank Romano). 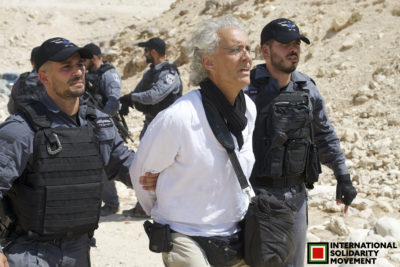 During this incursion, many people attempted to remove the earth barrier erected by the bulldozer although this was hampered by the Israeli forces. 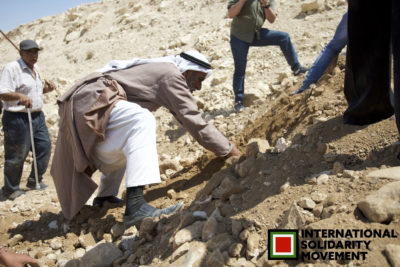 After the erection of this earth barrier, those present at Khan Al-Ahmar staged a peaceful demonstration on the edge of the highway. This was protest was against both the decision made by the Israeli Supreme Court and the erection of the earth barrier on the day (15/09/2018). The police and military presence during this demonstration was both unnecessary and disproportionate with the border police and Yasam (riot and crowd control unit) being drafted in, to suppress those protesting against the Israeli Occupation. 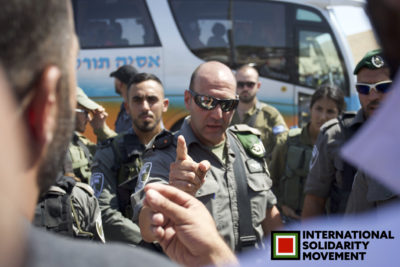 This was yet another arrogant act of violence by the Israeli forces with the intention to intimidate the residents of Khan al-Ahmar and the activists who were there in solidarity with the Palestinian Bedouin community. This attack is further raising the stress and upset for the people of the village, who are anxiously waiting for the demolition of their village and the school. Despite this, the community of Khan Al-Ahmar is not willing to give up in their peaceful fight against this oppressive attack on the place they call home. 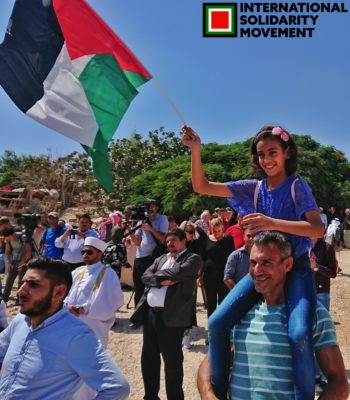